12/18/2017: This startup could replace your cable internet, but faces hurdles, Yahoo Finance

Some of you may remember my coverage a few years ago of the TV-via-Internet firm Aereo. After the Supreme Court shut down that startup on questionable copyright-infringement grounds, founder Chet Kanojia went into the fixed-wireless Internet market. Starry offers 200 megabits-per-second, no-data-caps access to some buildings around Boston, and when I was there in early December I quizzed Kanojia for an hour and change about his new venture’s progress.

Note that this story has been updated since posting: One caption got egregiously mislabeled, and one analyst I talked to didn’t spell out (which also means that I should have asked) that he wrote his case study without quizzing Starry directly.

All of these things have been part of my Decembers for 20 years (although working on a blog schedule has only been part of the deal for the last decade). I should have been able to get better at this, especially since I succumbed to leaning on the crutch of free Amazon Prime two-day shipping and let my wife handle the cards I’d otherwise not send out until early January. Nope!

CES, meanwhile, has kept growing in size–from 117,704 attendees in 2003 to 184,279 this January–and generally making a mockery of predictions that big tech shows no longer matter.

And because it’s 2017, there’s now the added hilarity of the Trump news cycle. Today, it’s given us the complete repeal of 2015’s net-neutrality rules. That’s been readership gold–2,678 comments on my Yahoo Finance post and counting–but it’s not exactly helping me ease into the holidays.

At least it’s not just me. Every CES-bound tech journalist has to be feeling the same crunch, and many of them have to post much more often. And as much as I hate CES PR pitches, I’m sure many of their senders tried to remind their clients that the space-time continuum still governs CES and that expecting reporters to attend an off-Strip event the first day of the show is wildly optimistic–and then the clients ignored their advice.

I do, however, have one thing extra going for me: CES doesn’t start until the second weekend of January, so I have an entire five blessed days between New Year’s Day and my getting on a plane. I plan on sleeping for as much of that time as possible.

Between the advent of cloud-synchronized note-taking apps and the everyday logistics miracles performed by online retailers, remembering good ideas for Christmas presents and turning those thoughts into wrapped packages placed under the right tree in plenty of time should have stopped being a problem years ago.

And yet my last holiday delivery arrived in the late afternoon of Dec. 24–and I made my last two gift purchases, one digital and one analog, at about the same time.

I can’t blame that on a lack of tools. I’ve had a frequently-updated “Gift ideas” note in Evernote since March of 2010–and I had a similar note in the memo-pad apps on various Palm phones and handheld organizers for most of the decade before. I’ve been able to lean on the time-condensing crutch of Amazon Prime since 2011, but by then I’d long since acquired a sense of logistical entitlement from the two-day shipping of such Web-retail pioneers as Cyberian Outpost.

But instead of letting me compile a thoughtful shopping list of gifts and fulfill that comfortably ahead of time, technology has only enabled and optimized my procrastination instincts.

It doesn’t help to have CES planning devour a large chunk of my mental processor cycles every December. But who am I kidding? If I didn’t have the annual gadget pilgrimage to eat my brain, I’m sure I’d find some other reason to leave present procurement until the last few days.

By now, your brain is probably crammed full with the holiday songs you’ve heard since you were five–and they’re all stuck on repeat, right?

Playing the traditional earworm cleanser, AC/DC’s “Back in Black,” wouldn’t be seasonally appropriate on this day. But maybe the following playlist will help: songs by artists based around D.C., or who at least got their start there, that either speak to the holiday or to the time of year.

I can now click a button on a Web page and have almost any product delivered to almost anywhere in the United States within two days at no additional cost. That’s a respectable alternative to Star Trek’s transporter, but it has somehow not freed me from hitting this point in December with this much Christmas shopping undone. 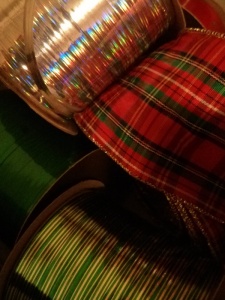 Arguably, the existence of Amazon Prime (like every other new parents, we signed up for the retailer’s free “Amazon Mom” option and then couldn’t wean ourselves of the convenience of prepaid two-day shipping) has only enabled my holiday procrastination. As in, right now, I’m comforting myself by thinking about how many more days I have to wait to place orders for family members and have them still arrive before they depart to their respective Christmas destinations.

Meanwhile, I’m also still figuring out my CES schedule–if I haven’t replied to your PR pitch about meeting at the show, just assume you’ll see me at your booth eventually, or at least don’t call to bug me about it–and lining up some other early-2014 events.

At least my wife takes care of the Christmas cards these days (otherwise, they’d be New Year’s cards). And I’m not on the hook to write any enormous gift-guide packages.

The good news is, in a few weeks both the holidays and CES will be behind me, and I’ll have a good 10 months to decompress and forget most of the lessons I’ve learned about why I should try to knock out more of these holiday chores before Thanksgiving.