Yesterday’s announcement of a merger of Taboola and Outbrain–the dreadful duo responsible for those horrible “around the Web” galleries of clickbait ads tarting up many of your favorite news sites–provided yet another reminder of how fundamentally schlocky programmatic ads can get online. 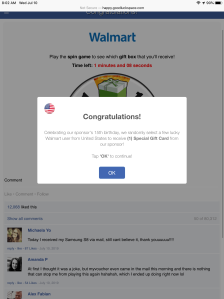 But so did a look at this blog.

When WordPress.com launched WordAds in 2012, the company touted a more tasteful advertising system that bloggers here could be proud of. The reality in the seven years since has been less impressive.

The WordAds program features some respectable, name-brand advertisers like Airbnb and Audible, to name two firms seen here tonight. But it’s also accepted too much tacky crap–including some of the same medically-unsound trash that litters Taboola and Outbrain “chumboxes”–while struggling to block scams like the “forced-redirect” ad in the screenshot at right.

Over the last year, I’ve also been increasingly bothered by the way these ads rely on tracking your activity across the Web. I know that many of you avoid that surveillance by using browsers like Safari or Firefox with tracking-protection features, but I’d just as soon not be part of the privacy problem. Alas, WordPress has yet to offer bloggers the option of running ads that only target context (as in, the posts they accompany), not perceived user behavior as determined by various programmatic systems.

I do make money off these ads, but slowly. Most months, my advertising income here doesn’t exceed $10, and I can’t withdraw any of the proceeds until they exceed $100. I had thought that I’d see one of those paydays last month–but August’s addition to my ad income left me 28 cents shy of that C-note threshold.

So in practice, my major return on WordAds is the opportunity to have my face periodically shoved into the muck of online marketing. That’s worth something, I guess.

My time contributing short updates to the microblogging site Sulia wrapped up unceremoniously Monday morning when an e-mail–“ending our paid arrangement”–landed in my inbox. The site’s pivoting in another direction that doesn’t involve paying for my input or that of what seems to be most other contributors it had signed up (for example, my friend Rocky Agrawal); so it goes. 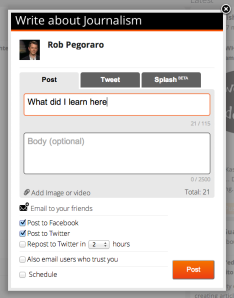 The departure of any one freelance client isn’t that big of a deal, but in this case it was a different sort of medium, and I learned some things along the way that seem worth sharing.

The basic idea here was to get paid a little for writing the equivalent of three tweets in a row–a minimum of 700 characters, a maximum of 2,500. On clicking the “Post” button at Sulia, those updates would appear automatically under my name on Twitter and at my public Facebook page–and that’s when I was met with confusion. Readers had no idea what the heck Sulia was or what I was doing there, leading me to post an explanation here after the first three weeks.

It took longer for me to pace myself so that I wouldn’t be rushing to finish my weekly quota of 10 posts in the last hours of Sunday–and to figure out what topics fit best into this pressurized container. In retrospect, holding off on live-tweeting interesting talks so I could post a longer recap on Sulia was a mistake, while it was smarter to use that greater character count to break some local wireless news in slightly more depth, do the cost-of-ownership math for a new smartphone, or recount my experience upgrading an operating system.

Overall, this site filled a useful void in my work by allowing me to share my notes in a medium slightly longer and less evanescent than Twitter while also getting paid (and without having to send an invoice first). I‘m not sure how I’ll replace that.

Among no-payment options, Twitter puts me back in a 140-character box, Facebook and Google+ have enough of my personal business already, LinkedIn seems too business-focused, and as for Medium–well, I already have a blog here. Alas, my WordAds revenue has been so minimal to date that it’s not worth thinking about the potential income from any one extra post.

Or perhaps the Sulia experiment was a mistake all along, and I should have put the time spent crafting those 40-some morsels a month into finding three or four good stories to sell elsewhere. Either way: on to the next thing…

Almost two years ago, I got invited to join WordPress.com’s WordAds program, and for the most part it’s worked well–aside from these advertisements failing to earn me truckloads of money, as opposed to enough for a nice dinner every now and then.

But a week or so ago, a few of the ads sent here by this program started looking distinctly sketchier. One made diet claims unlikely to survive scrutiny by the Food and Drug Administration, while another made the economically implausible offer of a free $1,000 Walmart voucher. And sometimes the appearance of these ads was followed by one of those spammy pop-up ads for the MacKeeper app–also served by the same Tribal Fusion ad network.

That’s not the “high quality” content WordPress promised when it launched this partnership with Federated Media. So I posted a cranky tweet about it and then followed up with a complaint sent through the appropriate form, saying that “If you don’t kick these garbage advertisers out of WordAds, I’ll drop out of the program.” (That was an easy threat to make, since I don’t have that much money at stake.)

I got a quick acknowledgment saying that my gripe was legitimate, followed the next day by a report that the advertiser had removed the offending items and pledged to clean up its act.

I haven’t seen any objectionable ads since; it appears the system worked. But if you see ads making a pitch that looks dodgy, let me know about it. Bad ads are a Web-wide problem, and the least I can do is not have my little corner of the Web contribute to it.

I never mind people reading this blog, but lately I’ve been getting a little antsy over some of the sites that seem to be sending people here. Over the past few days, a motley assortment of spammy-looking pages have been showing up as referers in my stats.

As you can see in the screen grab I took Tuesday morning, most seem to reside at domain names that suggest some sort of substance. But when I’ve clicked through I’ve found nothing but a list of search links, in some cases categorized and in other cases pretty much random. And the searches that I can see in some of those referring links–today, for example, “star hotel roma” and “blog for make money online”–have little to nothing to do with what I write about here.

Spam happens because people think that it will help them make money online. But just what kind of business model am I looking at here? The only way I can see the spammers profiting from sending people to my site is if they’ve got a business connection to a WordAds advertiser, but the ads I see have almost always been from name-brand companies–this program is deliberately limited to “high-quality,” national advertisers. So what’s the deal? If you have a theory, I’d like to read about it in the comments.

Starting earlier today, you might have noticed more and different advertisements on this blog. You can blame me for that: Back in November, WordPress.com introduced an option called WordAds, I quickly applied for it, and my invitation arrived this morning.

WordAds should appear more frequently than the minimal ad content you might have seen before. But those spots didn’t yield any income for me; the only way I could have profited from them was to hit 25,000 page views in a month, a mark I only came close to when I announced my departure from the Post. (Third-party ads remain forbidden here; see VentureBeat’s writeup of the WordAds news for more context.)

I’m not expecting a huge amount from WordAds; if it covers the $12/year domain-mapping fee, that’d be a sufficient start. But I also trust that the ads–provided by Federated Media, WordPress.com’s partner in this–will be tasteful and non-intrusive. Let me know if they aren’t. And thanks again for reading.