In addition to the work you see below, I also spent most of Tuesday afternoon volunteering at a vaccination clinic–about a week and a half after getting my bivalent booster at the same clinic.

Corporate executives apparently continue to believe they can cram a price hike into a fine-print fee without customers noticing. The e-mails I’ve gotten since this column ran suggest that this belief is grossly incorrect.

I spent Thursday morning hearing out a variety of pitches for millimeter-wave 5G wireless broadband’s latest possibilities, then filed this report for one of my favorite trade-pub clients that included some caveats from industry experts.

I thought this would be a quick post to write, then realized that this document ran about 30,000 words.

This story might have come out differently if I had not been forced to rely on a non-Pixel Android phone, devoid of the Pixel-only calling features I’ve gotten used to in recent years.

The Pew Research Center gave me an early look at this study… and then I still didn’t file it until after the embargo expired, because I had too many other things going on Thursday morning.

Another executive-branch tech-policy document became another long read for me this week.

This week’s edition of my usual podcast (also available in video form) featured a new addition to the usual gang of tech journalists: my PCMag colleague and fellow New Jerseyan Angela Moscaritolo.

Presidents’ Day used to feel like a real holiday–preferably experienced while enjoying views from a chairlift somewhere–but Monday doesn’t feel like much of one. I’m facing an abbreviated workweek, thanks to my Friday departure for Barcelona to cover Mobile World Congress. On the upside, I’m about to spend a few days in Spain for work.

This workweek technically started Sunday afternoon, when Verizon announced that it would once again sell an unlimited–more accurately called “unmetered”–data plan. After I’d filed this post, I got to rewrite a quarter of it to catch up with T-Mobile lifting the two worst restrictions on its own “unlimited” plan. 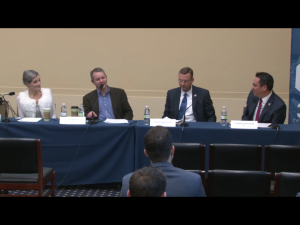 The nice thing about moderating a panel with members of Congress: They are guaranteed to make you look timely. Rep. Pete Aguilar (D.-Calif.) had to duck out halfway through this discussion, just as Rep. Doug Collins (R.-Ga.) made his belated entrance. You can watch the conversation, also featuring Higher Education Video Game Alliance president Constance Steinkuehler, on Twitch (this is the first and probably the last time I’ll appear on that game-centric network) and see photos from the event at ESA’s Facebook page.

I filed this story about the potential of chatbots to ease federal-government services in a simpler time when a Facebook Messenger bot would walk you through sending a message to the president. The Trump administration shut that down; I don’t know why, as my e-mailed inquiry to the White House press office did not yield a response.

My editors at USAT asked if I could file my column early, recognizing that something about Verizon advertising unlimited data was driving readers bonkers. The piece now has 27,788 Facebook shares, which suggests they had the right idea. 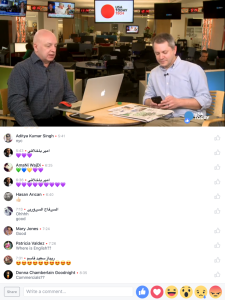 My USAT editors also asked if I could do a Facebook Live spot with tech and media reporter Mike Snider. This allowed me to see what USAT’s Tysons Corner newsroom looks like–yes, more than five years after I started writing for the place.

2/18/2017: Wireless carriers are fighting for your cash, and that’s good news, Yahoo Finance

While I was gathering string for a story on broadband infrastructure, I realized I already had almost everything needed to write a post about the wireless industry’s recent display of the benefits of competition–and the equally telling behavior of residential-broadband services that face few or no rivals.

I just watched the second presidential debate, and I was disappointed but not surprised by the lack of tech-policy banter. You?

10/3/2016: Why it matters that Google might be producing its own phones, Yahoo Finance

My suggestion at the end that Google might offer an installment-payment option for the new Pixel and Pixel XL phones–something analyst Jan Dawson suggested to me in an e-mail–panned out when Google introduced just that.

I spoke briefly about the Pixel and Pixel XL to the news station. One thing I wish I’d mentioned: These two new phones aren’t waterproof, unlike the iPhone 7 and the Galaxy S7.

I spent most of Monday at the White House, which is not a bad way to while away an afternoon. This South by South Lawn event did not feature free beer (at least during the day) and so fell short of being a D.C. salute to Austin’s South by Southwest festival, but on the other hand SXSW has yet to allow me to see Rep. John Lewis (D.-Ga.) speak.

Freelancing for multiple clients can sometimes lead to situations where one client asks you to write about an issue involving another.

HONG KONG–I am in this fair city for the first time since 1998 for the IFA Global Press Conference, a gathering put on by the organizers of the IFA trade show at which I’m going to speak on a panel (with my old Yahoo boss Dan Tynan) about virtual reality. I accept that it’s rather shameful to have waited 18 years to return to this part of the world.

4/13/2016: After hospital ransomware attack, time for some blunt talk about cybersecurity, Yahoo Tech

MedStar Health’s vague and dismissive responses to press queries got this story rolling, but this is about more than condescending PR. Compare this “we don’t have to tell you” attitude to the complete and mandatory disclosure you see in commercial aviation, and you will not be amused.

As I was already wearing a suit to cover the White House Science Fair that afternoon, I was better dressed than usual for this appearance on the Arabic news channel. My take on Facebook’s Messenger bots: Customer service is hard enough to do with actual people answering chat queries, and I’m not fond of having such an interrupt-driven medium take over more of my online interactions.

As I wrote on my Facebook page after chatting up many of the intimidatingly smart and poised middle-school and high-school exhibitors here: “I can only hope they will prove to be benevolent bosses when we all wind up working for them.” Tip: Don’t read to the end of the comments if you’re not in the mood to see some mean, ignorant white-guy resentment of brown kids and white girls doing well.

This column began life as a cranky tweet that spawned a little group therapy with Ars Technica’s Andrew Cunningham. I then turned it into a post with the help of some useful context from NPD’s Stephen Baker, a longtime source of mine.

An unadvertised benefit of owning an older Mac: Its random malfunctions provide a steady stream of topics for my USAT column. Fortunately, this crop had a happy ending–so maybe I don’t need to buy a new Mac just yet.

The other thing that happened this week: Friday marked five years since my last day at the Post. I didn’t expect at the time that half a decade later, my taxes would not have featured a new W-2 from anybody. I’ll have more to say about that later this week.

As you might have seen on Twitter, I was at the White House Tuesday for the Obama administration’s first Demo Day. (Yes, I should have added #humblebrag to some of those tweets.) This event was both a diversity-boosting exercise for the president and a chance for the 32 startups in the spotlight, many not founded by the usual crop of twenty-something white dudes, to get some wider exposure.

My Yahoo colleague Alyssa Bereznak was already set to write about the diversity angle–it’s a real problem for the industry, as you can see in the testimony from some of these female and minority founders in her story. I had RSVPed after her but figured I could file something profiling some of the more interesting startups.

But then after 35 minutes spent standing the East Room of the White House and watching live video of President Obama talk to various startups in an adjacent room, then hearing Obama’s speech (key line: “the next Steve Jobs might be named Stephanie or Esteban”) and singing “Happy Birthday” to the president (it being his 54th birthday), we were all ushered out past the startups and back to the press room. Oops.

I did manage to get back in, courtesy of Alyssa and I running into a press contact we knew, but by then some of these companies had packed up their exhibits. I wound up only talking to five of them, just three of which were on my own list of exhibitors to check out, before I was again ushered out. That was less reporting time than I expected–nothing compared to last summer’s Maker Faire at the White House— and did not yield enough material for a story.

Am I bothered by that? Not really. Some of the people I did meet will be worth talking to later on, I was only out $4 and change in Metro fare, and confusing friends by wearing a suit for work was its own reward. 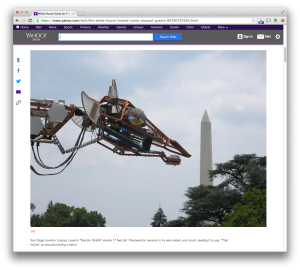