Google I/O consistently ranks as one of the most info-dense events I cover. After Google has put out its headline news in the opening keynote, the conference offers dozens of talks that get into the weeds on things like mobile-ad formats, Android’s notifications interface, and augmented-reality applications. I take far more notes than I can put into the stories I file from this event, but those notes inform many more stories over the next 12 months.

I talked about the WannaCry ransomware outbreak with Johnny Molson and Mike Wennmacher, hosts of this show on the Springfield, Illinois station WMAY. 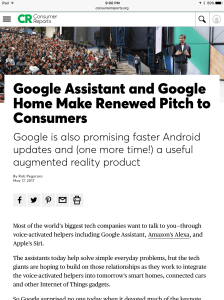 An editor at CR e-mailed to ask if I could do an I/O recap right as I was going to e-mail him to ask if they needed one.

I led with Project Treble, Google’s overdue move to speed Android updates by putting a hardware abstraction layer between that operating system and that machine-specific code that talks to a phone’s chipsets. Google did not, relegating Treble to brief mentions in presentations until engineering V.P. Dave Burke called Treble “probably the biggest architectural change since we started” in a Q&A session Thursday evening.

My big takeaway from a few I/O talks about Google’s Accelerated Mobile Pages effort: How about putting the same effort into making the desktop Web look less like hot garbage?

A chat over breakfast at the IFA Global Press Conference last month with another tech journalist led me to this under-reported problem with 4K televisions: how bad a DVD can look on them.