I’m finally done with the hell of tax prep and resuming something close to my usual level of productivity–after taking off Thursday to see the space shuttle Discovery arrive at the National Air and Space Museum’s Udvar-Hazy Center.

The Department of Justice’s antitrust lawsuit against Apple and five major book publishers–followed by a round of traditional-media coverage of the DoJ’s action that ignored how “digital rights management” restrictions distort that market–persuaded me to revisit the topic I last addressed in my penultimate Post column. If I keep rewriting this thesis enough times, will I eventually see publishing-industry executives agree with it? 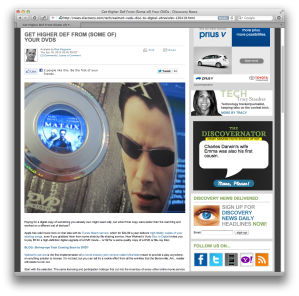 Much like last week, I enjoyed coming up with an artsy photo for a post. This one critiques a Walmart service that provides digital copies of your DVDs and Blu-rays. It’s a dubious value for same-quality duplicates, but I can see myself paying to get HD versions of movies I own on DVD. Walmart just needs to let me make the purchase without having to trek to one of its stores–and I write this after completing the transaction on the first try, unlike my fellow D.C.-area tech blogger Dave Zatz.

To reinforce every single stereotype of East Coast Liberal Media Elite Bias: This was the first time I’d set foot in a Walmart in maybe nine years. (Look, I hate driving for 30 minutes to do routine shopping. That’s the same reason I’ve yet to set foot in a Wegman’s.)

I might have gone easier on this Android tablet–at $250, it’s not a bad deal and is vastly more competitive than the first Galaxy Tab I reviewed–had Samsung not made such a strong sales pitch for its universal-remote app at demo in New York a couple of weeks ago. And if that app had not failed so badly in my own testing, even relative to my own snakebite history with allegedly universal remotes. If I hadn’t already been pushing the word count on this review, I also would have dinged Samsung for using a proprietary USB cable. (I didn’t ding the new iPad for that either.)

The front end of this column, explaining which apps and services might take the biggest bite out of a data quota, benefited from one of my last acts with the Galaxy Nexus phone before returning it last week: taking a screengrab of its data-usage report. The second half, relating a battery-saving tip for phones with OLED screens that I picked up while reporting a post about smartphone screen sizes for CEA’s blog, was also informed by a final test on overdue review hardware.

In the coming-soon category, I have an interview with former federal chief information officer Vivek Kundra in the May 2012 issue of Washingtonian. The print copy is now on sale but the story isn’t online yet, so look for a link to it in a future weekly-update post.