A day into trying out the shipping version, Microsoft’s Windows 10 Creators Update doesn’t look too different from the prior release.

That’s not all bad–already, Win 10 was at best the most pleasant and at worst the least annoying version of Windows I’ve used. But in addition to leaving out some advertised features hyped by me and others, Creators Update doesn’t fix a problem Microsoft shouldn’t have shipped in the first place: no time-zone support in the calendar app. 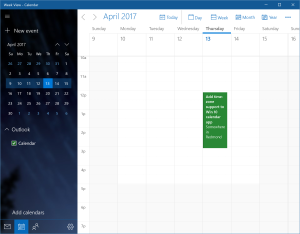 When I add an event outside of Eastern time, I have to factor in the time-zone offset before typing in its start and end times to see my appointment shown accurately away from the East Coast. And if there’s one task computers are supposed to free us from doing, it’s basic math.

I’ve seen this movie before, but the last time featured a quicker resolution. In the spring of 2010, I teed off on Google Calendar for the same feature failure–but by the end of that year, Google had fixed that and earned my forgiveness.

Microsoft’s intentions have remained a mystery for much longer. In October, I asked a publicist about the absence of time-zone support in the calendar app and got this mealy-mouthed answer:

“We are always exploring new features for Windows 10 and will continue to add new features and updates over time to help users get more done. We have nothing more to share at this time.”

It turns out that Microsoft really did “have nothing more to share.”

I could fix this issue by paying for Microsoft’s Outlook app as part of an Office 365 subscription, but that would feel like paying ransom. And it would unquestionably represent signing up for “groupware” features I don’t need as a sole proprietor. Or I could make my next laptop a MacBook Air–except that’s another case of an unfeeling company ignoring clear customer desires, this time with more money at stake and a longer history of neglect.

I’ve looked for free or paid alternative calendar apps with time-zone support in the Windows Store but have yet to find one. Is this a giant collective blind spot among Windows 10 developers? Do they all work in one time zone? I know Microsoft employees don’t.

I guess I’ll have to continue grumbling intermittently whenever I use Win 10. Fortunately, I have plenty of practice with that.

This week took a lot more out of me than the list below would suggest: I filed two longer features and finished edits on a third, none yet published, after which I sank a lot of time into a story that wound up not working out. And then I spent Friday in a haze of Nats-playoff-exit malaise.

I last gave a talk to the computer club at this retirement community in December 2010, and the kind of gadgets you might give or get as gifts has changed greatly since then. I also didn’t have the Post’s Speakers Bureau to pay me for the appearance this time, but a friendly audience and overdue practice in extended public speaking made the drive worthwhile.

I got a surprisingly thankful response from Apple PR for reporting the defective search behavior that doesn’t show events more than two years old. (I had to resort to Spotlight to see when I last spoke at Greenspring.) Since a column that amounted to “this is a bug that they say they’ll fix” would run short, I concluded by acknowledging the bipartisan nature of glitchy bundled calendar apps: Windows 10’s somehow doesn’t support time zones. Can you suggest a replacement that does?

A fascinating DC Legal Hackers panel I attended two weeks ago got me thinking “there’s an article in this,” but I didn’t get around to filing one until Friday. So, yeah, I didn’t exactly keep it 💯 on this story.

Spending the past five days in Barcelona, six hours ahead of the East Coast, has me thinking anew about the finer points of having different digits on your clock and those of editors and readers. 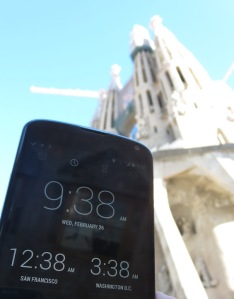 Yes, jet lag sucked. I woke up Monday at 4:30 a.m. and then couldn’t get back to sleep, leading to a couple of naps in the press room. (A laptop does not make a good pillow.) But a day later, my eyelids no longer felt like they weighed 200 pounds, and I realized again that the time-zone gap can also be my friend.

Specifically, it turns the morning into—not an accountability-free zone, but at least a self-directed time, thanks to almost nobody in a position to direct my coverage being awake. Then it allows my copy to arrive early in an editor’s day for a change. If my editor is based in the Bay Area, I look even more prompt: The story sent at 5 p.m. arrives at 9 a.m.

At some point, this equation will flip and I’ll have an evening upended when an editor decides my copy needs another run through the typewriter. But so far, the worst that’s happened is me turning into that annoying guy who answers e-mails on his phone during dinner.

Social media also highlights that temporal shift: Twitter and Facebook look a lot quieter than usual until lunchtime, to the point where I question the wisdom of tweeting out observations that will get lost in the timelines of most of my usual audience. But then I  have my phone pinging with notifications until I go to sleep myself.

Back at home, the three-hour gap between the East and West Coast should also benefit me when dealing with editors there. But it’s too easy to waste that advantage until it’s 6 p.m. here and I have a different deadline looming in my own time zone: cooking dinner.

Flying to the West Coast, meanwhile, permits jet lag to work for me: On the first couple of days, I usually snap awake not much later than 5 a.m., and I am never more productive than in those hours before I finally get breakfast. And if the event I’m covering won’t have people committing news after lunch—for example, Google I/O keynotes usually start at 9 a.m. and run until about noon—my workday will also end earlier than usual.

But then I also have to deal with the 7-9 p.m. keynote that opens each CES. Not only does it throw a wrench in my scheduling machinery, it ensures I can’t eat until a time that feels more like 11 p.m. At least I don’t have to write stories about those things anymore.