Twitter has occupied an embarrassingly large part of my online existence since the spring of 2008–a span of years that somehow exceeds my active tenure on Usenet. But the past two weeks of Twitter leave me a lot less certain about how much time I will or should spend on that service.

I did not have high expectations in April when Elon Musk–who, never forget, already has two full-time jobs at just Tesla and SpaceX–offered to buy Twitter. He had already revealed a low-resolution understanding of content moderation on social platforms but took the advice of a clique of tech bros and told Twitter’s board that he had the answers: “Twitter has extraordinary potential. I will unlock it.”

Seeing Musk then spend months and what could be $100 million in legal fees trying to squirm out of his accepted, above-market offer of $54.20 a share did not elevate those expectations.

Just before a court case he probably would have lost, Musk gave in, threw $44 billion ($13 billion borrowed) on the table and took over Twitter on Oct. 28. He quickly sacked a handful of top executives before firing about half of the workforce with careless cruelty. One friend figured he’d gotten canned when he couldn’t log into his work laptop.

Things have skidded downhill since. On Twitter, Musk keeps showing himself an easy mark for far-right conspiracy liars and the phony complaints of online trolls; in its offices, he’s ordered a rushed rollout of an $8/month subscription scheme that grants the blue-circled checkmark of a verified account, on the assumption that credit-card payment processors will catch fraudsters.

The predictable result: a wave of fake but “verified” accounts impersonating the likes of Eli Lilly, Nintendo, George W. Bush, Lockheed Martin, Telsa and Musk himself.

Also predictable: Twitter advertisers reacting to this chaos and their fear of wobbly content moderation (rejected by Musk) by smashing the Esc key on their spending plans until they can figure out what’s going on. Musk has responded by whining that companies pausing ad campaigns amounts to them “trying to destroy free speech in America.”

As for legacy verified accounts like my own, Musk has oscillated from saying that they’d require the same $8/month charge to suggesting they’d continue to saying they will be dropped–while also introducing, yanking and then resurfacing gray-checkmark icons for certain larger organizations over a 36-hour period. Oh, and not paying your $8 a month might mean your tweets fall down a bit bucket.

After a Thursday that saw Twitter’s chief information security officer, chief privacy officer, and chief complaince officer resign by early morning, Musk told the remaining employees at an all-hands meeting that “Bankruptcy isn’t out of the question.” Since Twitter now owes more than $1 billion a year in interest on the debt from Musk’s acquisition, that warning seems reasonable.

I am not writing this out of schadenfreude. As much as Twitter can drive me nuts (what is it with the militantly stupid people in my replies?), I’ve found it enormously helpful as a public notebook, a shortcut to subject-matter experts, an on-demand focus group, and an ongoing exercise in short-form prose. As (I think) my Washington Post colleague Frank Ahrens once observed, Twitter lets journalists write the New York City tabloid headlines we couldn’t get away with in our own newsrooms.

If Twitter really does implode, which now seems a much more real possibility even if a roundtrip through Chapter 11 is more likely, I don’t know how I’d replace it.

Many of the people I follow there are advancing evacuation plans on a federated, non-commercial, somewhat confusing social platform–not Usenet, but Mastodon.

I have taken tentative steps to do likewise, in the sense that I created one account on the well-known server Mastodon.Social and then realized I’d created a separate account on the xoxo.zone server in 2018 after hearing Mastodon talked up at a meetup during the XOXO conference in Portland. Now I need to decide which account to keep and which one to migrate, and indecision over that makes it easier to stay on Twitter and watch it burn.

Meanwhile, seeing Musk’s stark, public display of incompetence continues to leave me baffled when I compare that to the Musk venture I know best, SpaceX. If Musk ran SpaceX this impulsively and with this little willingness to learn from others, multiple launch pads at Cape Canaveral would be smoking holes in the ground.

Instead, SpaceX is the leading provider of launch services in the world, sending Falcon 9 rockets to space and landing their first stages for reuse on a better-than-weekly basis. “Transformational” is not too strong of a word for what SpaceX has accomplished since it first orbited a prototype Dragon capsule in December of 2010; this part of Musk’s career ought to be Presidential Medal of Freedom material, with bipartisan applause.

(I got to see that reentry-singed Dragon capsule up close in July of 2011 when NASA hosted a Tweetup at the Kennedy Space Center for the final Space Shuttle launch, yet another experience I owe in some way to Twitter.)

I keep hoping that I will see this sort of steely-eyed focus in Musk’s stewardship of Twitter. Instead, he appears to be off to an even worse start than I could have imagined. And I can imagine quite a bit.

I didn’t realize this until adding up the numbers, but I have now covered CES 25 times–24 times in person, from 1998 through 2020 and again this past week, plus last year’s virtual version of the show. None of those previous trips to Las Vegas featured an infectious-disease test after returning, but this week’s has; fortunately, the rapid antigen tests I took Friday night and Sunday afternoon have each yielded negative results.

1/3/2022: How to get your wireless carrier’s network for less – if you can live with these trade-offs, USA Today

This column outlining ways to save money on wireless phone service from resellers of the major carriers (some of which are owned by those big three companies) was the last piece I filed in 2021.

I wrote up an embargoed announcement from Amazon about plans to send a version of Alexa on the Artemis 1 lunar orbital test mission of NASA’s Orion spacecraft. After I filed this post the evening before the embargo time, I was amused to see a giant video sign on the Strip in Vegas tout the “Alexa, take me to the Moon” command that was only supposed to be revealed the next morning.

Four days beforehand, I got asked to moderate this panel on AR and VR learning after the previous moderator had somebody in his household test positive. That’s not a lot of prep time, but my fellow panelists Rohan Freeman (founder of Sine Wave Entertainment), Chris Stavros (founder and CEO of makeSEA) and Michel Tzsfaldet (CEO of Tekle Holographics) made my job as understudy moerator easy.

1/7/2022: The little-known reason why competing with Google is so hard, Fast Company

This was another post I filed at the end of 2021. It started in early November in Lisbon, when I happened to sit next to a search-engine startup executive on a Web Summit shuttle van and started quizzing him about business.

I had to try out the Vegas Loop, the Teslas-in-tunnels system that Elon Musk’s Boring Company built underneath the Las Vegas Convention Center. And then I had to sell a post about my experience of it.

The “weird stuff seen at CES” piece has been a staple of my coverage of the show for years. As usual, the hardest part was deciding what exhibits to include and what to leave out.

In addition to the stories below, I was on the local news this week–but not for anything related to my work. A WJLA correspondent and cameraman were looking for quotes from passerby in Ballston about the possible sequestration budget cuts, and an optimistic sentence or two from me showed up on Monday’s broadcast.

2/13/2013: When The Gadget You Review Can Also Review Your Work, Disruptive Competition Project

In the first of two posts about Tesla Motors CEO Elon Musk’s attack on a negative review of the Model S by New York Times reporter John Broder, I looked at how the rise of social media and the ability of connected devices and apps to log a journalist’s use change the dynamic between reviewer and review. For more thoughts along those lines, see Dan Frommer and Mathew Ingram.

2/15/2013: How Breakthrough Technology Can Get Beaten Up In The Press, Disruptive Competition Project

After reading enough comments accusing Broder of being a liar, a shill or worse (as opposed to placing too much trust in tech support from Tesla executives that normal drivers wouldn’t get anyway), I followed up by unpacking some real reasons why the media can misread disruptive technology so badly. One example: my first review of the iPad. 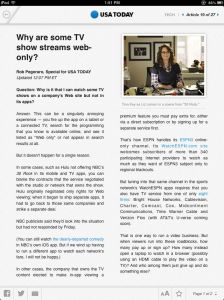 Months ago, my column briefly mentioned the uselessness of ESPN’s WatchESPN app: Unlike its site of the same name, that program doesn’t let us watch ESPN3. I exchanged a few e-mails with PR reps for the sports network about that, then had an excuse to revisit the gap between Web and app availability of online video after getting annoyed by 30 Rock’s absence from Hulu’s mobile and connected-TV apps.

The column also shares advice (hat tip, MacRumors and Lifehacker) about getting non-Apple Lightning cables for less at Amazon and Monoprice. Why so few alternatives so long after the debut of that connector? Apple engineered Lightning to enforce a sort of DRM on the accessories market, as the New York Times’ Brian X. Chen explained this week.

On Sulia, I shared my skepticism about the latest connected-watch fad (now with more Apple rumors!), discussed the unsettling but unavoidable PR trend of enticing reporters with all the Web traffic the agency or the client’s social-media channels can send to a post, and noted how Microsoft’s checkbook hasn’t been able to buy enough updates to the Windows Phone Foursquare client it hired an outside developer to write. You also would have gotten a preview of Wednesday’s post on Monday; Sulia’s more generous character count made it a better place than Twitter to sketch out that story idea.