My last stop in New York Thursday evening before heading to Penn Station for the train back to D.C. was not a place I would have put on my itinerary anytime in high school or college: I’d decided I’d get a beer at the Stonewall Inn. 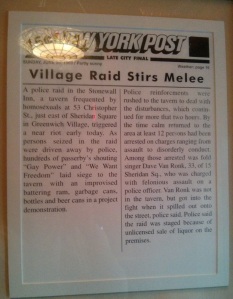 The day before, the Supreme Court had demolished that cruel exercise in bigotry called the Defense of Marriage Act. I’d despised that law not just for how it demeans the relationships of gay and lesbian friends, but also for what it says about straight couples like my wife and I– our marriage is so weak that it must be propped up by a law stigmatizing the unions of other consenting adults?

(It’s remarkable how many of my Georgetown classmates came out of the closet after graduating from America’s oldest Catholic university. I have no idea why that is.)

The logic of raising a glass to the demise of DOMA at the birthplace of the gay-rights movement in America seemed inescapable. I just hoped I wouldn’t be seen as barging in on somebody else’s celebration.

“Somebody else”… that’s a phrase that can come up a lot if you grow up in the majority culture. From a certain warped perspective, a Black History Month or a Susan B. Anthony quarter can seem like a prize for other people. Well, no. As I wrote in another context, our overcoming our worst instincts is part of our story as a country, and we should honor that.

(While I’m on the subject: My fellow white people, please get to know “Lift Every Voice And Sing.” It’s one of the most beautiful songs ever written, and it’s part of our story too.)

So I strolled down Seventh Avenue, crossed at Christopher Street, walked in (note that the current establishment is not the same as the one where riots broke out after a police raid in 1969) and asked for a beer. Did I fit in? You will be shocked to learn that… wait for it… I wound up talking about computers and smartphones with a couple of guys.

I look forward to some repeat of the experience closer to home when Virginia’s constitution is no longer stained by an amendment banning even civil unions for some of my fellow citizens.