It’s been a quiet week, but next week won’t be. Tomorrow evening, I depart for Berlin for the IFA electronics trade show, where it looks like I’ll see a Samsung smart watch as well as a lot of gadgetry that won’t make it over to the States.

My latest turn as a Twitter chat host involved shepherding a discussion about what mobile apps businesses use. I was surprised to see so few mentions of Office-document compatibility. 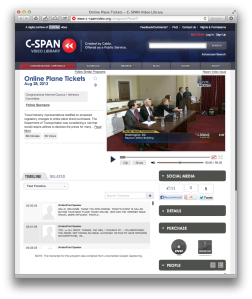 8/28/2013: Buying Your Next Plane Ticket Online: How Can the Internet Make Travel More Efficient?, Advisory Committee to the Congressional Internet Caucus

I discussed the “New Distribution Capability” initiative to modernize airfare search and sales–which should allow travel-search sites to offer more details about airlines’ add-on services but might also allow for personalized offers that would make airfare shopping even more complex–with Matthew Jennings (International Air Transport Association), Charlie Leocha (Consumer Travel Alliance), Sharon Pinkerton (Airlines for America) and Andrew Weinstein (Open Allies for Airfare Transparency). C-SPAN elected to air our debate on C-SPAN 2–hello, slow news week!–which seems to have led everybody else on the panel to show up in suits.

8/29/2013: A Better Airfare-Booking Model Remains Up In The Air, Disruptive Competition Project

That conversation was interesting enough that I decided to get into the weeds about this issue for DisCo. I think the airlines have a decent case on the merits, but have non-trivial consumer-trust issues in the way. For much more detail, please see Cranky Flier blogger Brett Snyder’s coverage.

How I suggested reviewing Orbotix’s robotic ball to my editors at Discovery: “A gyroscopically stabilized rolling ball, lit from within by an array of multicolor LEDs, that you can control with your smartphone. I don’t need to finish this pitch, right?” The post’s headline isn’t displaying on the page, thanks to some CMS malfunction I don’t want to know about.

This week’s USAT Q&A will run tomorrow instead of today, if you were wondering where it went.

At Sulia, I noted the parallel between a hijacking of the New York Times’s nytimes.com domain and one of the Stop Online Piracy Act’s proposed attacks against allegedly infringing sites (which got a nice shout-out at Techdirt), gave a tentative thumbs-up to Twitter’s new conversation view, wondered how in the world Apple picks new Apple TV channels, said “there’s an app for that” is a poor fix for balky transit ticket-vending machines, and just about begged Apple to make iPhoto suck less.