You don’t have to run a correction when a story changes after you’ve written about it–but it is polite to follow up. Here’s a not-so-short list of updates to stories I’ve done this year.

When I wrote that Google’s new, unified privacy policy would almost certainly be recast to let users opt out of having the company assemble a detailed portrait of them based on their use of separate Google services, I was wrong; that has yet to happen.

Sonic.net’s groundbreaking fiber-to-the-home service–a steal at $69.95 a month for 1 billion bits per second–seems to be off to a fine start in Sonoma County, but the planned expansion to San Francisco’s Sunset District is still on the way. It hasn’t shown up as an advertised offering on this Santa Rosa, Calif., Internet provider’s home-services page either.

Remember when adjacent-friend-discovery apps were going to blow up after their moment in the sun at SXSW in March? Didn’t happen. Facebook bought Glancee (and has yet to do much publicly with its technology), while Highlight seems to have fallen off the map (maybe I’m not hanging out with the right crowd?).

The ethics of outsourced manufacturing, fortunately, have stayed in the headlines since I wrote about them in March for CEA. And we may even be seeing legitimate progress, to judge from the New York Times’ story earlier this week recounting upgrades in pay and working conditions at contract manufacturers Foxconn and Quanta’s Chinese factories.

I’m still waiting to see comparable progress in liberating e-books from “digital rights management.” The sci-fi publisher Tor/Forge–a subsidiary of Macmillan–went DRM-free in July, but other branches of the major publishing houses have clung to this self-defeating measure.

After saying so many good things about the car2go car-sharing service–and seeing that story get picked up in a few other places–I have to confess that I, ahem, haven’t used the service since. Capital Bikeshare is even more convenient and cheaper for trips under two miles, plus I need to make my way into the District to jump into one of car2go’s Smart fortwo vehicles.

I tempered my praise for Sprint’s Evo 4G LTE by wondering how long its users would wait to get Google’s software updates. Answer: almost six months, the time it took HTC and Sprint to deliver the Android 4.1 release Google shipped in June.

I was pretty sure I’d buy a Nexus 7 tablet after liking it as much as I did in July. But now that I own an iPad mini, that purchase seems like it would be redundant. Am I making a mistake there?

After teeing off on Apple Maps in the first chapter of my iPhone 5 review for CNNMoney.com, I have to give Apple credit for fixing the two worst flaws I called out. It now lists the correct address for the Kennedy Center as its first search result and provides a route to Dulles Airport that don’t cross any runways. But it still doesn’t know about Yards Park or the new 11th Street Bridges across the Anacostia–and the latter omission means its directions will now send you on a closed stretch of freeway.

My upbeat review of Samsung’s $249 Google Chromebook noted some build-quality concerns, in the form of a loose corner of the screen bezel. I found out the hard way that it’s more delicate than that; its LCD is now broken, and I don’t even know how. (We do have a two-year-old at home, but it’s also possible that I dropped something on it.)

My advice about enabling multiple-calendar Google Calendar sync on an iOS device by setting up your Google account as a Microsoft Exchange account will soon be obsolete. Effective January 30, Google will no longer support Exchange syncing on new setups (although existing ones will still work). Fortunately, it’s also posted instructions to enable multiple-calendar sync without the Exchange workaround.

3/23/2013: Updated the link for the car2go review after the post vanished in a site redesign and, for CMS-driven reasons that escape me, could not be re-posted at the same address.

Remember when I wrote a few weeks ago that I’d been working on some longer features? The results of that effort surfaced this week, adding up to 6,620 words published under my byline and making me look far more productive than I was.

I also gave a talk about e-book DRM Tuesday, one of Lisa Schaefer’s ongoing “Future of Books” meetups around the D.C. area, but there doesn’t seem to be a transcript or recording of that.

This was going to be my contribution to the paper’s site two weeks ago, but Verizon needed more time to get its story straight. To answer the “why didn’t you just tell people to jailbreak their iPhones” question: USAT is a general-interest publication, and I don’t know of any jailbreak that works on the iPhone 4S with the current 5.1 version of iOS–your odds seem iffy even on the 5.01 release. This column also endorses using the open-source VLC to play DVDs purchased overseas…which, I admit, may not exactly be a general-interest topic. 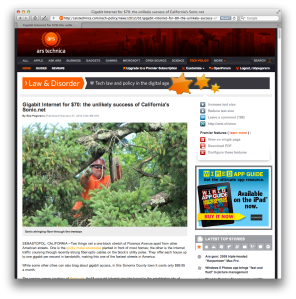 One typo aside, I enjoyed the hell out of reporting this story. Knocking on doors to talk to strangers, multiple rounds of interviews with sources, writing dozens of column inches’ worth of copy, having some material left over in my notes afterwards–this felt more like traditional newspaper journalism than anything I did at the Post in my last few years there. It was also a treat to write for a site that I’ve cited and appreciated for such a long time. (Trivia: I quoted Ars Technica founder Ken Fisher in a July 28, 2000 column for the Post about the joys of upgrading one’s computer.)

I then went on to write a few hundred words more responding to comments about the site on Ars and in Reddit’s thread about the piece.

If you think oversized smartphones like the Galaxy Note I took to task last week are an aberration, prepare to be surprised. Manufacturers are gearing up to ship a lot more phones with screens 4.5 inches or larger, as I found out after consulting a DisplaySearch analyst. (That conversation also yielded a useful tip about extending battery life on devices with OLED screens, which you may soon see in my USA Today column.) For those curious about the measuring implement in the photo I took: It’s an old printer’s ruler, which puts the Note’s screen at 32 picas.

I used some of those leftover notes from the Ars piece for this shorter post for Discovery about the experience of using that connection, based on my own tests in late December and subsequent e-mails with some of subscribers. As I was writing this, I posted the photos I took back then to Flickr so I could link to one in the story. When foxnews.com showed up as a referrer in my stats there a day later, I discovered that Fox (with which Discovery has a content-sharing arrangement) had reposted the piece.

2/29/2012: Gamification: Green tech makes energy use a game—and we all win, Ars Technica

When I first pitched Ars on the idea of doing a feature on Sonic, I didn’t know they were already preparing to ask me if I’d be interested in writing a feature on the topic of how better data and game mechanics might help us save energy. This was a lot of fun to put together as well… I guess I’d forgotten about the rewards of long-form journalism. I’m glad that I now have the time to do these things.

A week or two ago, as I was reading the corrections box on page A2 of the Post, I thought to myself that it had been a while since I’d had to run a “cx” on my own work. I credited having a saner workload… and then wondered if I was due for an error anyway. 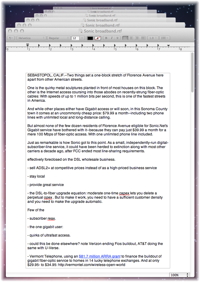 Turns out I was. I left a simple but stupid mistake in the feature I wrote for Ars Technica about the unlikely success of indie ISP Sonic.net–listing the price of this provider’s 1 Gbps fiber-optic service as $79.99 instead of $69.95. My editor at that site unknowingly put that price in the headline and therefore, as you can see from the link above, memorialized it in the story’s address too.

Sonic’s CEO Dane Jasper spotted the mistake within a few hours of the story’s appearance and notified me in a Twitter message. I e-mailed my editor, who had it fixed minutes later… and then I could get on with my “how could you?!” follow-up. (Figuring out how an obvious error wormed its way into a story is more constructive than walking around and cursing at yourself.)

The Versions feature of Apple’s OS X Lion, as seen at right, revealed that I didn’t add the price of the service to a draft of the story until Feb. 13–weeks after I’d started my reporting. Then I typed in the wrong number and kept using it from then on.

The Evernote file with my notes from interviewing Jasper and some of his customers had never included that price. My e-mail showed that I did mention the right number, rounded up to $70, in my pitches to Discovery News (which should soon post my take on what a connection that fast feels like) and then Ars–but had subsequently written “$79.99” to one source on Jan. 25 and to another on Feb. 11.

It appears that this number lodged itself firmly in my brain and never got out.

I can’t blame any of the usual excuses, like not having time to verify things. I spent weeks on this piece and checked just about everything else–the copy I filed had a link back to the City of Sebastopol’s demographics page confirming its population as 7,397. But for the number that wound up in the headline, the most important one in the piece, I never thought to link back to the relevant press release on Sonic’s site. (Doing so would have also avoided the confusion expressed by one Ars reader: Why isn’t this service listed among Sonic’s services?)

So that’s this week’s lessons re-learned: Put the important numbers in your notes at the start instead of leaving them in your head, and link to your sources, so readers don’t have to take your word for things. Or just don’t be a flake.

(I’ve yet to see any readers call me out on this. But I’m irked anyway, which is why I just devoted almost 500 words to unpacking my mistake.)