My trip to the NAB Show ended with a red-eye flight home to the East Coast, something I don’t think I’ve done for business travel since 1996. Let’s just say I can’t rally from the experience as well as I did back then. 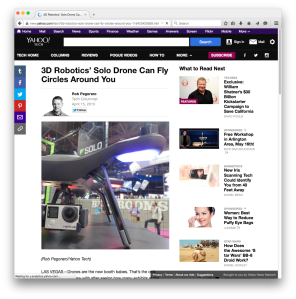 I had meant to file this piece about financial-account security and tax-refund fraud before heading out to National Airport for the first of two flights to Vegas but instead pretty much wrote the whole thing on the ORD-LAS segment.

After reading it, please look over last year’s tax-time column: a recount of how Intuit, the company whose weak security helped grease the skids for a fair amount of identity-theft refund fraud, has worked to ensure it won’t face competition from federal or state governments when it comes to online tax prep.

I’m still not sure what possessed 3D Robotics to debut this drone at a convention for the broadcast media, but I thought the product fascinating enough that it was worth writing up the experience. My one disappointment: Nobody besides my editor seems to have picked up on my “a Solo can shoot first” line.

My primary reason for going to the NAB Show was to participate on this panel, in which longtime radio exec Jeff Simpson quizzed Radio World editor Paul McLane and I about the competition AM and FM stations face from online alternatives. I emphasized locality: Stations should try to sound like where they are, something a worldwide app like Pandora can’t do. If only more commercial FM stations would follow my advice when it comes to music programming.

I’ve touched on this topic before, but this time I had the benefit of talking to some smart mobile-app developers who clued me into some important differences in how location-based apps work in iOS and Android.