With the news Tuesday morning that Amazon will put one of its “HQ2” locations in Arlington, Crystal City–or “National Landing,” the name picked to encompass an Amazon realm that will reach some adjacent blocks in Pentagon City and Alexandria–has suddenly become one of the D.C. area’s most interesting neighborhoods.

That was very much not the case when I moved there with three friends in 1993. For a single guy in his early 20s, there was one word for the neighborhood then: Loserville.

Then as now, Crystal City was bisected by a partly-elevated highway, with superblocks filled by bland, boxy buildings on either side. But in 1993, most of these office and apartment structures couldn’t be bothered to engage the street: Aside from a few scattered exceptions, retail and dining establishments huddled in the Crystal City Underground.

My walk to Metro from our apartment on South 23rd Street–a hulking structure with concrete-comb balcony railings that evoked Communist Bloc architecture–either took me through those climate-controlled corridors or along sidewalks with immaculate landscaping but few human life forms, as you can see in pictures I took that summer.

(My Washington Post colleague Frank Ahrens later wrote a feature about Crystal City that ran under the headline “Habitrail For Humanity” and featured this wonderful line from Sen. John McCain, a resident then: “You can start to feel more like a mole than a human.”) 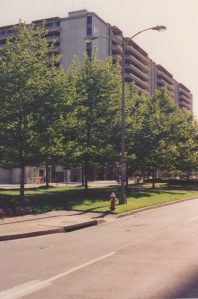 Shopping was not an issue, with a Safeway a short stroll into the Underground and other everyday retail spots not much further along. I had an easy Metro commute to the Post and other places in D.C., and we were close enough to National Airport that I once hiked home from it. But the only affordable nightlife-ish spot I remember on our side of U.S. 1 was a Hamburger Hamlet.

Crossing the other side of the road shamefully called “Jefferson Davis Highway” (and which marred our building’s mailing address) would get you to a short little strip of restaurants in older storefronts on South 23rd Street. But first you had to choose between a long wait for a crosswalk signal or holding your nose as you briskly strolled through a pedestrian tunnel that reeked of piss.

Meanwhile, all the cool kids lived in apartments or group homes in Adams-Morgan, Cleveland Park, Dupont, Georgetown or Woodley Park. Going to parties at their places–nobody ever headed in the other direction–meant dreading the question “where do you live?”

After 15 months, I was delighted to move to an apartment in Arlington’s Court House neighborhood and be able to walk to cheap, delicious Vietnamese food and some moderately-hipster bars.

Crystal City has grown less ugly in the 21st century. A series of redevelopments turned the west side of Crystal Drive into a great stretch of restaurants and bars, a few new and less-bland buildings have sprouted around the neighborhood, and the brownfield to the north that mainly served as an impound lot for towed cars has become the terrific Long Bridge Park. Even most Jefferson Davis Highway addresses are gone, now that Arlington decided in 2004 to reassign buildings street addresses that mapped to their front doors.

The people quoted in a Post piece Tuesday voicing complaints along the lines of Crystal City having “no nightlife” must not realize how bad things used to be.

Amazon’s arrival should make them better still, replacing more of those ’60s and ’70s-vintage hulks with taller, shinier structures. And unlike Amazon’s other HQ2 spot, NYC’s Long Island City neighborhood, Crystal City will also see serious infrastructure improvements: Current and future Metro stops will get new entrances, its Virginia Railway Express station will be expanded, the walk to National will take place on a pedestrian bridge, and the long-term vision involves turning U.S. 1 into a surface-level, human-scaled boulevard.

But Arlington’s plans don’t include another upgrade that’s out of the county’s hands until the General Assembly notices the current century: rechristening that highway so it’s no longer an exercise in Confederacy whitewashing. Click “Okay” already, Richmond.