We have only 17 days until Election Day, which is good. I don’t think I can stand any more of this. 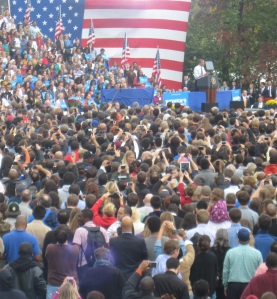 Compared to earlier presidential campaign seasons, I held off the obsessive news-gathering stage for a long time this year. But the combination of the advancing calendar and shifting, contrary poll results has finally pulled me in; there’s no way I won’t be less productive through November 6. Possibly the 7th, depending on how long election night runs before somebody calls a winner.

This isn’t the first presidential campaign that I could follow to an unhelpful degree: 2000, 2004 and 2008 took large bites out of my schedule. (There were probably intense discussions on Usenet about Dole and Clinton in ’96 that have since escaped my memory.) But in each of those years, I spent most of my workdays in an office, while mobile Web access ranged from nonexistent to underdeveloped.

Now, however, there’s nobody sitting next to my desk to ask why I’m checking Talking Points Memo or FiveThirtyEight for the fifth or eighth time in the workday. And stepping out to run an errand doesn’t mean I can’t get that fix of political updates–even if they amount to little more than noise.

The other difference this time is that, unbound by delusional social-media guidelines, I don’t have to pretend that I have no interest in the outcome. So I’m a little more open about what I think on Twitter. And on Friday, I went to President Obama’s rally at George Mason University (photo above), which allowed me to hear “Romnesia” make its debut in this year’s headlines. Fact: campaign rallies can be fun if you support the person running. I didn’t know that before, having never gone to one until Friday.

(That support doesn’t extend to donating money or my labor. Working on behalf of a candidate goes way beyond making a little noise in the stands.)

The wait on election night to see if things go my way may not be so much fun. I like the president’s odds–but as a Nats fan, I know how the score can change unexpectedly and unpleasantly if your team loses focus. Seventeen more days.