This was a challenging week, since our daughter’s camp schedule had her at home during most of the day. If I had a dollar for every time I was asked to help find a Lego piece… I’d buy our kid more Legos, because they are awesome.

My inspiration for writing this was Microsoft president Brad Smith calling for government regulation of this technology; having the ACLU report that Amazon’s Rekognition facial-recognition service falsely identified 28 members of Congress as criminal suspects motivated me to finish and file the post. 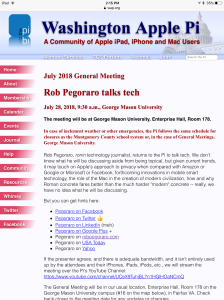 I spoke at the monthly meeting of this Mac/iOS user group about changing notions of security–or, to phrase things less politely, how foolish and gullible we’ve been in prior years. (Seriously, the defaults most people operated on in 1995 and 2000 look horrifyingly stupid now.) I also called out such lingering obstacles in infosec as Apple’s unwillingness to support “U2F” two-step verification via encrypted USB keys and Microsoft’s bizarre stance that full-disk encryption is something only business users need. In the bargain, I donated my now-deceased MacBook Air to the Pi’s MacRecycleClinic and gave away a bag of trade-show swag, including a couple of U2F keys.

Update, 7/31/2018: I had an embed of the Pi’s YouTube clip of my talk, but I didn’t know that stream had playback disabled on other sites until a reader called that out in a comment. (Thanks, jeffgroves!) So I’ve replaced that with a link to the clip.