Hey, August, you’ve been doing a really bad job of being a slow news month. Could you please clock out already?

When I suggested this topic to my editors, I had no idea that a day later, Spotify would uncork a self-inflicted techno-panic by… wait for it… rolling out a vague and expansionist privacy policy written by lawyers for other lawyers. 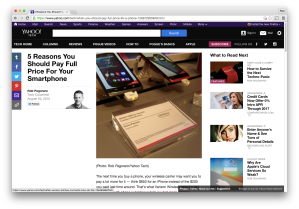 I filed the first draft of this story last week, then had to update it twice when Sprint a) said it would stop selling subsidized phones at the end of the year and b) the next day, rolled out a warmed-over version of its old “iPhone for Life” lease plan. You can guess what other, oft-updated work of mine needed repeated revisions this week; look for them to show up online shortly.

In an alternate universe, this would have run July 5. Instead, I wrote another, timelier column and put this one back on the shelf until now. That extra time led me to discover a useful option in Google Play Music that’s missing from Apple’s music apps.

This week was pretty slow. Next week won’t be.

This expands on the post I did for Discovery about Instagram’s terms-of-service fiasco. Instead of yammering on about what that service and others have done wrong, I suggested a few ways they could communicate ToS changes more clearly to their customers.

(But will some other overconfident dot-com ignore this kind of advice and blunder into yet another PR meltdown within three months? Sure.)

1/4/2013: A Guide To Seeing Past CES Hype, Disruptive Competition Project

After attending CES for 15 straight years, I’ve seen more than enough over-hyped debuts go on to flop at retail or never even make it that far. This curtain-raiser goes over a few factors that I’ve seen sink promising CES launches, but two days later I feel like I should have enriched the piece with more historical examples.

A reader question led to the pleasant surprise that printing from Android and iOS is a lot less restricted than Google and Apple’s own solutions would suggest. It also caused me to realize anew how rarely I use our printer-scanner to put ink on paper; since I switched to mobile boarding passes for almost all of my flights, my number-one use for that Canon device is probably scanning in checks for deposit through our bank’s site.