TORONTO–I’m coming home from here with an unusual souvenir: a plastic card with embedded electronics. 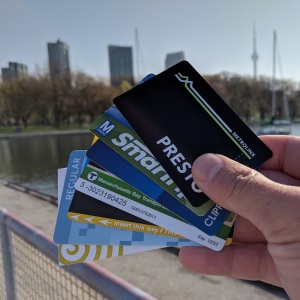 This city made me do it. Buying a Presto Card to pay for transit, even with its $6 purchase fee, made sense factoring in the slight discount it gets on the Toronto Transit Commission’s streetcars and subways and the much larger break it gives on the Union Pearson Express airport train. With the Collision conference ensuring I’ll travel here for the next three years, I would be crazy to pay cash fares.

The same logic has led me to build a collection of transit smart cards beyond my Metro SmarTrip card. I’ve got a CharlieCard for the T in Boston, a Clipper card for BART and other Bay Area transit agencies, and a TAP card for L.A.’s Metro. The MetroCard I keep for the NYC subway and the Viva Viagem card I use on Lisbon’s Metro aren’t as smart, but they do the same job of freeing me from fumbling with cash at faregates.

And having all these cards handy doesn’t just feed my transit snobbery; eliminating a barrier to hopping on a subway, streetcar or bus saves me real money when I travel.

This isn’t quite the future of transit payments I had in mind when Metro rolled out the SmarTrip card in 1999. But until more transit systems follow the examples of Chicago and London and let passengers pay via NFC with their phones, I’m stuck on this track.