After reviewing dozens of smartphones and a few not-so-smart ones, I’ve settled on a couple of standard battery tests. To see how long the device will hang on in a best-case scenario, I’ll set it to check a couple of e-mail accounts, Facebook and Twitter (with WiFi and Bluetooth on but not connected), then let it sit on a desk and see what percent of its battery is left after 24 hours. To subject it to a far-less-forgiving trial, I will then play streaming audio through the Pandora app (with the same wireless settings and background apps active) and force the screen set to stay illuminated full-time. 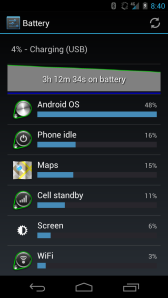 I’ll note these figures in individual reviews, but as they pile up it gets harder to check back to see how a phone compares to its cohorts. That’s where this post comes in: It lists battery-life results from prior reviews and some post-publication tests, and I’ll update it each time I review a new phone. The same goes for tablet battery data, which you can see after the jump.

Keep in mind a few caveats: In some cases, especially with the oldest reviews, I may have departed slightly from the testing routines described above. Some of these figures are also approximations, on account of my not having kept whatever notes had exact times. And you could be looking at the occasional fluke result here.

END_OF_DOCUMENT_TOKEN_TO_BE_REPLACED

Back when most people used mobile phones to talk–because any sort of sustained online use would be too painful–it was obvious how you should test their battery life: You’d want to know how long you could carry on a conversation. 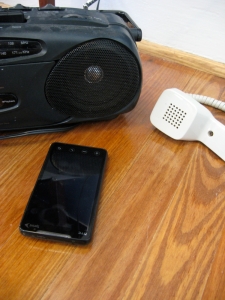 So as a reviewer, I would have to stage a talk-time test, preferably without actually speaking for four or five hours at a stretch. For a while, I would call my desk phone at the Post with a review phone, then place the phone on hold and wait for its battery to run down. (I had to take the bus home from work a few times to avoid having the call drop on my way into the nearest Metro station.) Then I switched to a slightly more elaborate setup at home: As you can see in the photo at right, I’d tune a radio to WAMU, call my home line and place the phone in front of the radio’s speaker, where it would have uninterrupted hours of human speech to listen to and relay to the home line.

But once mobile Web browsing became something you might enjoy doing, I had to incorporate that into my evaluation. As I recall, my tests on the first iPhone included setting its browser to either the scoreboard page at Major League Baseball’s site or the Post’s home page, both of which refreshed automatically every minute or so.

Once I realized the appeal of on-the-go Web-radio listening and recognized how it required more data transfer by a smartphone, I decided I needed to test that as well. So I now start up the Pandora app–which has the advantages of being available for most major mobile platforms and of offering an “Auto-Lock” option to keep the screen illuminated for a worst-case test–and see how long it takes for a phone to run down.

Another realization came after I’d spent enough time with smartphones with a habit of fetching data in the background (such as my own Android model): Not all phones have the same standby time. For example, I discovered that while an iPhone 4 would have more than 90 percent of a charge remaining after 24 hours sitting on a desk, one Android model had less than half left.

When deadlines permit, I now conduct a standby test too, as you can see in today’s writeup of AT&T’s version of the Samsung Galaxy S II and Verizon’s Motorola Droid Bionic. (Both showed about 70 percent left on their battery gauges.) Between that and the Web-radio test, I think I have a good handle on a phone’s best- and worst-case performance in most contexts.

But not all. Using GPS for turn-by-turn navigation always runs it down quickly–if your car doesn’t have a USB port in the dash to charge the phone, buy a cheap, generic USB adapter and stash it in the glove box with a spare USB cable–and so does sharing its Internet connection over WiFi tethering. Taking a phone to a bandwidth-starved environment like CES, where it’s constantly hunting for a signal, kills its battery too.

What sort of battery-life tests have you found most useful? Which ones should I incorporate into my own research?