One of the ways that self-employment has taught me to see the calendar differently: Once you put November in the books, you’ve pretty much put your yearly income in the books too unless you can sell something early in December to a client that pays unusually fast. (See also, a client worth keeping around.)

My contribution to USAT’s coverage of Federal Communications Commission chair Ajit Pai’s move to repeal all of 2015’s net-neutrality rules was to unpack the disclosure requirements he would impose on Internet providers. One big catch: An ISP wouldn’t have to post on its own site that it blocks or slows certain sites or charges others for priority delivery of their bits.

11/28/2017: Why the FCC chair says social networks are the real threat to the free internet, Yahoo Finance

Pai gave a speech Tuesday that included some reasonable arguments against the current, proscriptive net-neutrality rules–and then pivoted to the deeply dubious contention that we should really worry about Twitter and other social networks being mean to conservatives.

I wrote up McAfee Labs’ cybersecurity forecast for next year–which identified the companies selling connected gadgets for your home as a major part of your privacy and security risks.

Three weeks ago in San Francisco, I sat down with my USAT editor for the first time after two-plus years of her handling my column to brainstorm tech-support columns that might resonate over the holidays, and this was among them. Conveniently enough, my Thanksgiving tech support a week ago allowed me to inspect my mom’s Fios bill to see how Verizon breaks down its promotional discounts and what you’ll owe after their expiration.

In an alternate universe, I’d be heading to New York Tuesday for CE Week, but I had a panel invitation here and none there. I also recalled how low-key last year’s conference was, so I decided to stick around here after I’d already put in for a press pass. To everybody who’s pitched me about their CE Week exhibits or events (which seem to be more numerous than last year’s): Sorry!

Yet another net-neutrality post? Yes. This one covered two angles I had not addressed adequately before. One is how Internet providers’ own deployment figures show they’ve kept on expanding their networks after the advent of open-Internet rules. The other is the poor odds of a small ISP getting the time of day from a major streaming-media service, much less inking a paid-prioritization deal that would yield enough money to finance broadband buildout.

This group’s newsletter quoted my critique of the cybersecurity lessons offered in a French TV report. I didn’t find it much more helpful than much of the infosec advice you’ll see in mainstream coverage.

It’s been years since I last uploaded any pictures to Photobucket, but only a decade ago it led the market for online image sharing. Its subsequent descent into a) becoming an ad-choked hell and b) demanding that free users who had accepted its invitation to embed their photos elsewhere switch to paying $400 a year is sad on a lot of levels.

You can tell I’m about to go to New Orleans because I put a bunch of songs from the Meters and the Neville Brothers on my phone. As was the case about this time last year, my excuse is the Collision conference; I’ll be moderating four panels at this offshoot of Web Summit. 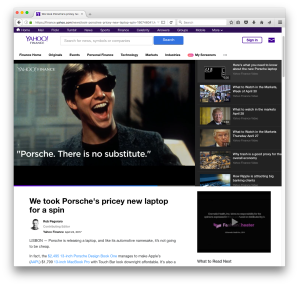 I filed this first-look report from the IFA Global Press Conference, but it didn’t get posted until the day after I returned from Lisbon.

The copy I filed went into more detail about FCC chair Ajit Pai’s weird, red-baiting attack on the liberal tech-policy group Free Press, but my editor thought that was a little too much inside baseball. I should note that I’ve spoken at two of Free Press’s events, most recently in Denver in 2013; I may have missed any praise from the organizers for Marx and Lenin when I ditched the conference for an afternoon to see the Rockies home opener.

A day after Pai spoke about his intention to demolish the current net-neutrality rules, I unpacked the FCC notice of proposed rulemaking that would accomplish that goal.

I wrote this post about the issues that keep some four billion people off the Internet after attending a Tuesday IEEE event featuring TCP/IP co-author Vint Cerf, but this week’s surplus of net-neutrality news caused it to get set aside for a few days. Having a chance to talk shop with one of the inventors of the Internet remains a mind-bending experience.

Writing this piece about the amount of access some apps have to your data led me to yank the TripIt app out of my Gmail–I can have that service advise me about changes to my travel plans almost as easily by forwarding booking e-mails to it. And that way, I won’t have TripIt thinking an incremental e-mail from an airline or Amtrak represents a new itinerary.

I spent the first two days of the week commuting to Reston (by Metro and then Bikeshare) for a fascinating conference on drone policy issues. That hasn’t yielded a story yet, but it should soon. 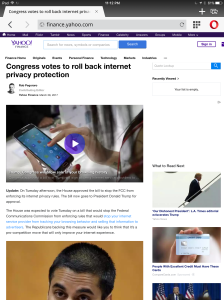 The speed with which Congress moved to dispatch pending FCC regulations that would have stopped Internet providers from selling your browsing history to advertisers without your upfront permission is remarkable, considering how our legislators can’t be bothered to fix actual tech-policy problems that have persisted for decades. It’s also remarkable how blind many people in Washington are to the immense unpopularity of this move.

I’m told this post got a spot on the Yahoo home page, which may explain the 2,796 comments it’s drawn. Would anybody like to summarize them for me?

The news station interviewed me about this issue. I was supposed to do the interview live, but after I got bumped for breaking news, they recorded me for later airing. How did I sound?

I have to admit that I missed White House press secretary Sean Spicer using part of his Thursday briefing to denounce the idea of the FCC classifying Internet providers as “common carriers,” which he compared to them being treated “much like a hotel.” That would be because I’ve never made a habit of watching White House press briefings live; it’s a little concerning to see alerts about them splashed atop the Post’s home page.

This story benefited from some fortuitous timing. When I wrote it, USAT’s site had not yet switched on encryption, and so the copy I filed had to note its absence. I asked my editor if she’d heard anything about a move to secure the connection between the site and a reader’s browser. She made some inquiries and learned that this upgrade would go into effect Sunday, my column’s usual publication day.

Our daughter spent the first three workdays of the week home sick with a cold, which had a calamitous effect on my productivity. Especially on Monday, when my wife’s schedule left her unable to take any time off from work.

This look at the fate of net-neutrality regulations under new Federal Communications Commission chairman Ajit Pai benefited from an interview that was supposed to happen during CES. But I could never coordinate my schedule with that of political commentator and TYT Network founder Cenk Uygur during the show, so the publicist who had suggested a CES meeting instead arranged a sit-down when Uygur was in Arlington for a conference last weekend. Since TYT’s news and talk shows depend on Internet distribution, the possible effect on Internet video of weakened open-Internet rules was an obvious topic to discuss.

This is a post that I would have written sooner had my workweek not been so thoroughly disrupted. When I finally had some free time, it hit me that Vizio’s deceptive presentation of the “Smart Interactivity” feature that tracked your viewing habits could fairly be called a “dark pattern” user experience–and that I could get an informed ruling on that by asking the guy who coined that term, London-based user-experience designer Harry Brignull.

2/12/2017: How to stop seeing your Amazon searches everywhere, USA Today

The Amazon ad-preferences setting that stops the retail giant’s ads from featuring your recent shopping searches on other sites has been around for a while. But to judge from the appreciative response I’m seeing on Twitter and Facebook to this column, its existence was news to many Amazon shoppers.

I tried to take Monday off and only partially succeeded, then got knocked down for most of the next three days by a completely-unsurprising CES cold. That event isn’t just a trade show, it’s a massively-multiplayer biological-warfare experiment.

On the upside, I managed to edit and caption enough of my CES photos to get a Flickr album started.

I finally emerged from my home Friday morning to bikeshare over to Dupont and see Federal Communications Commission chairman Tom Wheeler’s final address. The reporting challenge here was figuring out which sources Wheeler had cited without naming in his defense of net-neutrality regulations–one of which turned out to make a weak case for or against those open-Internet rules.

The reader e-mail I got right before CES addressed a topic I’d covered not even a year ago, but since then a Wheeler initiative to require subscription-TV providers to ship no-fee apps to watch their programming has died on the vine. And a pay-TV proposal (yes, signed on by DirecTV) to do much the same on a voluntary basis has yet to result in shipping apps. In DirecTV’s case, it hasn’t even yielded updates to add AirPlay or Chromecast video output to the AT&T-owned service’s existing apps.