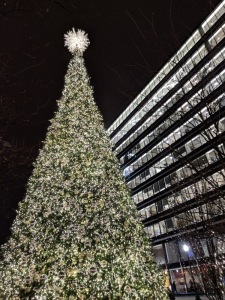 All of these things have been part of my Decembers for 20 years (although working on a blog schedule has only been part of the deal for the last decade). I should have been able to get better at this, especially since I succumbed to leaning on the crutch of free Amazon Prime two-day shipping and let my wife handle the cards I’d otherwise not send out until early January. Nope!

CES, meanwhile, has kept growing in size–from 117,704 attendees in 2003 to 184,279 this January–and generally making a mockery of predictions that big tech shows no longer matter.

And because it’s 2017, there’s now the added hilarity of the Trump news cycle. Today, it’s given us the complete repeal of 2015’s net-neutrality rules. That’s been readership gold–2,678 comments on my Yahoo Finance post and counting–but it’s not exactly helping me ease into the holidays.

At least it’s not just me. Every CES-bound tech journalist has to be feeling the same crunch, and many of them have to post much more often. And as much as I hate CES PR pitches, I’m sure many of their senders tried to remind their clients that the space-time continuum still governs CES and that expecting reporters to attend an off-Strip event the first day of the show is wildly optimistic–and then the clients ignored their advice.

I do, however, have one thing extra going for me: CES doesn’t start until the second weekend of January, so I have an entire five blessed days between New Year’s Day and my getting on a plane. I plan on sleeping for as much of that time as possible.