I didn’t realize this until adding up the numbers, but I have now covered CES 25 times–24 times in person, from 1998 through 2020 and again this past week, plus last year’s virtual version of the show. None of those previous trips to Las Vegas featured an infectious-disease test after returning, but this week’s has; fortunately, the rapid antigen tests I took Friday night and Sunday afternoon have each yielded negative results.

1/3/2022: How to get your wireless carrier’s network for less – if you can live with these trade-offs, USA Today

This column outlining ways to save money on wireless phone service from resellers of the major carriers (some of which are owned by those big three companies) was the last piece I filed in 2021.

I wrote up an embargoed announcement from Amazon about plans to send a version of Alexa on the Artemis 1 lunar orbital test mission of NASA’s Orion spacecraft. After I filed this post the evening before the embargo time, I was amused to see a giant video sign on the Strip in Vegas tout the “Alexa, take me to the Moon” command that was only supposed to be revealed the next morning. 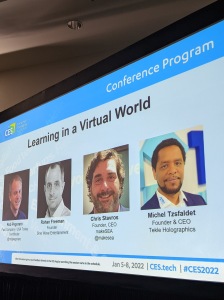 Four days beforehand, I got asked to moderate this panel on AR and VR learning after the previous moderator had somebody in his household test positive. That’s not a lot of prep time, but my fellow panelists Rohan Freeman (founder of Sine Wave Entertainment), Chris Stavros (founder and CEO of makeSEA) and Michel Tzsfaldet (CEO of Tekle Holographics) made my job as understudy moerator easy.

1/7/2022: The little-known reason why competing with Google is so hard, Fast Company

This was another post I filed at the end of 2021. It started in early November in Lisbon, when I happened to sit next to a search-engine startup executive on a Web Summit shuttle van and started quizzing him about business.

I had to try out the Vegas Loop, the Teslas-in-tunnels system that Elon Musk’s Boring Company built underneath the Las Vegas Convention Center. And then I had to sell a post about my experience of it.

The “weird stuff seen at CES” piece has been a staple of my coverage of the show for years. As usual, the hardest part was deciding what exhibits to include and what to leave out.