In an alternate universe, the two posts I filed from the Demo conference in Santa Clara would have been replaced by one or more from the Online News Association’s annual conference in Atlanta. If only the two events had not been scheduled right on top of each other… 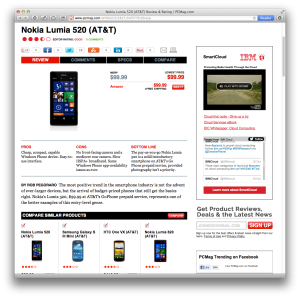 I first checked out this phone at Mobile World Congress in February and thought the world could use more budget-priced smartphones. The $99.99 price does entail some compromises–like no front camera, and no flash on the back camera–but as a starter smartphone it seems fine.

10/17/2013: So Nice To See People With Money Regard Journalism As Not Doomed, Disruptive Competition Project

I wrote a quick reaction to the news that eBay founder Pierre Omidyar plans to invest $250 million in a full-spectrum news startup, which I see as something materially different from the splashy funding rounds that a few more specialized news sites have  racked up lately.

My first report from the Demo conference focused on the more interesting, sci-fi-esque gadgets and apps introduced there. The post has received about 1,400 Facebook likes so far–and I don’t know why, since it didn’t pick up any at my Facebook page and didn’t get a mention at Discovery’s.

Here, I looked at the privacy propositions of several apps and services launched at Demo, most of which will probably get labeled by some, fairly or not, as “creepy.” Look for an update to this post correcting a mistake I made: contrary to what People+’s demo suggested, this Google Glass app does not do facial recognition.

I got an e-mail from a longtime Post reader reporting a horrible tech-support experience at a company that had led him to believe he’d been talking to Apple. That sounded odd, but the story quickly checked out.

On Sulia, I posted several reports from Demo (for instance, Bounce Imaging’s camera- and sensor-stuffed ball, EmoVu’s emotion-detecting webcam system, HueTunes’ synesthetic software, and Yelp CEO Jeremy Stoppelman’s onstage interview), reviewed my initial, glitchy experience with United’s inflight WiFi; correctly predicted that coverage of Facebook’s new privacy policy for teens would focus on its option of public posting instead of its increase in teens’ default privacy; and reported on my introduction to Windows 8.1 on my ThinkPad.