One of the recurring First World problems in technology journalism is possessing review hardware that you don’t get around to reviewing anywhere. That’s easier to happen than you might think: The device you want to review only works with another one that doesn’t warrant a writeup from you; a PR shop sends along a gadget you don’t need along with one you requested; you ask for a loaner device but then can’t interest a paying client in a story on it. 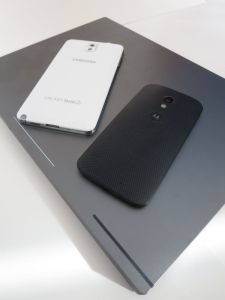 Either way, I hate to send the hardware in question back without getting some journalistic value out of it. (No, I don’t get to keep review hardware for my own use–and selling it on eBay isn’t an option either.) Here’s how I’ve tried to make additional use out of three gadgets that found their way to me without making it into a detailed review by me.

Galaxy Note 3: This size-XL phone was a supporting actor in my reviews of Samsung’s Galaxy Gear watch. I’ve since used this Sprint-spec Note 3 as a guinea pig in tests of the charging speed of its forked USB 3 cable (it was only about 22 percent faster than a generic USB cable) and of Absolute Software’s Lojack kill-switch app. I’ve also been taking notes on which of Samsung’s default settings merit changing–starting with that annoying whistle notification sound. Look for a cheat sheet on that topic, here or somewhere else.

Moto X: When Republic Wireless sent me its version of this phone, I was sure I could sell somebody on an assessment of how its WiFi-centric wireless service has evolved since last summer’s cruder offering. Nope! The loaner unit got a brief mention in a post about some positive trends in the mobile-phone industry and hasn’t shown up in any stories since then. I’ve used it to check the speed of Sprint’s LTE in my neighborhood (just now at my desk, a weak 4.51 Mbps down and 4.58 Mbps up) and to check its battery life (unsurprisingly enough, it’s vastly better on WiFi).

Chromebook Pixel: At Google’s I/O conference this May, journalists were invited to take home loaner units of this $1,299 Chrome OS laptop. I thought it would be educational to see how the Web looked on an ultra-high-resolution, 2560-by-1700-pixel display. Answer: pretty sharp! But I’ve spent surprisingly little time on the thing. For me, at least, the utility of a laptop with all of my usual apps trumps the beauty of a screen bereft of those tools. My last intensive use of the machine was to set up a fake Facebook account so I could check the social network’s default settings for a how-to post at Yahoo Tech, but this laptop’s smooth gray finish has also served as a backdrop in a few gadget close-up shots.

If you have any lingering questions about these devices that I might be able to answer, speak up now–sometime in the next few days, they’re all going home.