Having Apple news play such a large role in my work this week reminded me a little of older, perhaps simpler times. Having the Trump administration’s clumsy attempts to suppress TikTok and WeChat eat up much of the rest of the past several days made it clear that we live in different times. 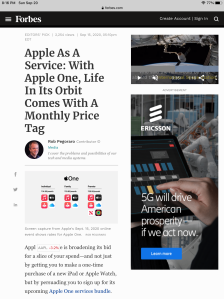 My take on Apple’s venture into selling bundles of its services: By making iCloud backup the least-generous part of the two cheaper Apple One plans, Apple is putting the entertainment cart before the storage horse.

I returned to the podcast of one of my tech-analyst friends to unpack Apple’s Tuesday announcements.

In addition to letting me vent about the unhelpfulness of the Trump administration’s attempt to punish these two mobile apps, this post provided a useful demonstration of the limits of Twitter to promote a story. As in, having people with a combined follower total well into the hundreds of thousands tweet or retweet links to the post has yet to get its page-view total into four digits.

I asked my interpreter upfront how you’d say “crony capitalism” in Arabic, and then the host only asked about what this deal would further protect the privacy of TikTok users. My answer: it doesn’t appear to do any such thing.