One of these things is not like the others.

My Mobile World Congress report represents a sequel to the post I wrote for the Disruptive Competition Project from last year’s MWC, except I’m now more optimistic about the market for unlocked, unsubsidized phones. Even if a lot of people in the media still can’t grasp how to compare unsubsidized and subsidized prices. 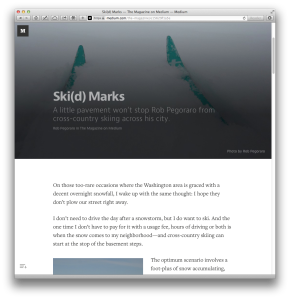 I’d been meaning to write something for The Magazine’s outpost on Medium–in part because I like writing for that outfit, in part because I wanted to try the editing interface I’d heard so much about without writing for free. This essay about the joys and trials of cross-country skiing in the city–something I originally thought I’d write here–turned out to be that opportunity.

A reader asked a while back about whether she could pop the micro-SIM from a work-issued iPhone 4S into her own iPhone 5’s nano-SIM slot. I decided to wait to answer it until MWC, so I could see how much traction the nano-SIM was getting in the market. Answer: not much.

Sulia was all about MWC this week: my impressions of Nokia’s don’t-call-it Android X phones, a recap of the debut of the privacy-optimized Blackphone, how Samsung’s new Galaxy S 5 gets a little closer to the stock Android interface, an inspection of a $25 smartphone prototype running Firefox OS, why the developers of a phone version of the Ubuntu version of Linux think carriers will like it, and an update on the cordless-charging standards battle.

After the jump, a Flickr slideshow from the show and its surroundings.

END_OF_DOCUMENT_TOKEN_TO_BE_REPLACED

(Since a site redesign at the Consumer Electronics Association resulted in the posts I wrote for CEA’s Digital Dialogue blog vanishing, along with everything there older than last November, I’m reposting a few that I think still hold up. This one ran July 27, 2012; it’s on my mind again after two recent stays with relatives who had broadband Internet at home but no WiFi router connected to it.)

For well over a decade, I’ve had the same wish list for each new gadget: smaller, lighter and thinner than its predecessors. But lately, I wonder if I should be more careful about what I wish for. 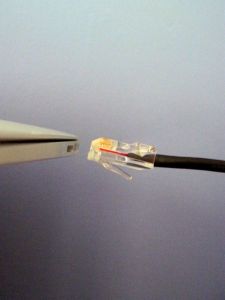 I still appreciate carrying around devices that weigh less and take up less space than earlier models—preferably while running longer on a charge. But some recent devices I’ve tested or purchased suggest the costs of being too thin or too small.

Consider the connections around the edges of many new laptops, including the MacBook Air I just bought, but also many Intel-based Ultrabook PCs. The thinnest among them often leave out wired Ethernet ports and standard HDMI video outputs, requiring users to pack adapters.

That’s not a huge tradeoff for video. If you expect to plug a laptop into a monitor or an HDTV, you’re foolish not to bring your own cable, and one with a micro-HDMI plug at one end will take up less space than a full-sized equivalent. But with networking, you’ll need to bring an adapter supported by your operating system or trust that Wi-Fi will always work, no matter how many other people jam the airwaves near you.

And as just about anybody who’s gone to CES or any other tech conference can testify, that rarely happens. Veterans of these events know to look for Ethernet, and some companies have taken note: Google won compliments for providing wired Internet access in the press seats at its I/O conference last month.

The race to build the thinnest laptop, as opposed to the lightest, doesn’t make much sense from a usability perspective. An added eighth of an inch in thickness won’t make a laptop any more awkward to operate or carry. It’s not a thick phone that will break the line of a suit when tucked into a pocket.

Smartphones risk a different sort of miniaturization malfunction. Since the 1990s, phones using the GSM standard have used compact SIM (subscriber identity module) cards to store account data. This has made it easy to move a number from one phone to another and, with an unlocked phone, switch temporarily or permanently to a new carrier.

That’s given GSM a serious advantage over the competing CDMA standard, which doesn’t require any such physical separation of an account and a phone. (Trivia: Some CDMA carriers have employed a SIM equivalent called an R-UIM  or removable user identity module, but not in the U.S.)

In recent years, the SIM scenario has gotten a little more complicated with the arrival of micro-SIM cards. But you can still use a micro-SIM in place of a standard card (technically a mini-SIM) if you pop it into an adapter or position it so its contacts align properly in the slot (I’ve done it, but it took a few tries). And you can cut down a SIM to micro-SIM size.

Now, however, the industry has certified a “nano-SIM” standard that is smaller still and slightly thinner. So you won’t be able to shoehorn a micro-SIM into a nano-SIM slot, and using a nano-SIM card in phones designed for bigger cards will require an adapter instead of just careful placement.

Whether saving .0037 cubic inches of space over the already tiny micro-SIM card (in context, .1 percent of the volume of an iPhone 4S, considerably less in the current crop of big-screen smartphones) is worth that complication seems to have gone unexplored. Would we be better off if everybody had standardized on micro-SIM and let designers find other ways to condense phone hardware? We’ll never know.

Manufacturing ever-smaller gadgets also imposes costs we may not notice until later on. You may find that you can’t upgrade the memory on a new laptop—a serious risk if an operating system upgrade requires more memory than the last release. Are we ready to foreclose on the idea of upgradable hardware?

Repairing a tablet or a computer can also move from tricky to difficult once its components get tightly-packed together. The same goes for recycling a defunct device—although if a manufacturer provides its own, easily accessible recycling service for those gadgets, I’ll give it a pass.

The risk in making this kind of complaint is sounding like a grumpy old man, desperately clinging to his trusty old Ethernet cable and SIM card as he stands in the way of progress and the laudable goal of making computers simple, worry-free appliances.

But at a certain point, standards friendliness, repairability and expandability should outrank shaving yet another fraction of an inch or an ounce off a product. That would leave plenty of other things companies can try to beat each other on. Did I mention battery life?