I’m now just over a fortnight into using Apple’s macOS Sierra, and I can report that it’s not enough time to get used to that name’s oddball capitalization. The past two weeks have, however, allowed me to come to some conclusions and form some questions about this operating-system update.

The pleasant disk-space mystery: Both times I’ve installed Sierra–an uneventful 50 minutes on my 2012 MacBook Air, an absurd three hours and change on my 2009 iMac–the OS has rewarded me with multiple gigabytes of free space. The MacBook, which was getting so close to full that I had to delete several gigs’ worth of data to install Sierra at all, gained 17 GB, while the iMac got an extra 18 GB back.

I do have the MacBook set to back up its Documents and Desktop folders to iCloud (neither contain enough data to threaten iCloud’s meager 5 GB quota of free space), but that comes nowhere near explaining the newly-liberated volume. And although Sierra doesn’t count “purgeable” files–synced files and media, rarely-used fonts and dictionaries, and other items that the system can always re-download after deletion–the totals of purgeable data listed in the info boxes for each startup disk don’t come close to explaining the discrepancy either. 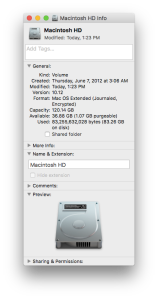 Universal Clipboard is kind of magical: When I copy something from my iPad, I can paste it into my MacBook and vice versa. This wireless copy-and-paste feature neatly solves an everyday problem of switching between a mobile device and a “real” computer, and the fact that it’s happened with zero fuss amazes me. (I hope I haven’t just jinxed it.)

My iMac, however, is cut off from Universal Clipboard, as it’s a good three years too old. Once again, Apple: I’ll think about buying a new model when you don’t charge me 2016 prices for designs barely changed from 2014.

Search snafus: On both computers, a search in the Calendar app for events that I know exist–like conferences I’ve attended every year since 2010–now fails to show results older than late 2014 in my Google-hosted calendars. Sierra knows these older events exist, because Spotlight searches still find them. A post in Apple’s tech-support forums cites an unnamed Apple rep as saying this is a bug that should be fixed, which I hope is true. I also hope somebody in Apple PR replies to the e-mail I sent Wednesday asking about this.

Meanwhile, Mail has developed its own annoying habit of bouncing back to the oldest messages in my inbox after I cancel out of a search. I trust that’s a bug too, because I cannot think of many search use cases that conclude with the user thinking “now I would like to see my correspondence from 2011.”

Stuff I haven’t tried much yet: I know that Siri leads off Apple’s pitch for Sierra, but I only really need one personal-assistant app–and that app serves me best on the device I carry most often, my Android phone. I also have yet to try out Apple Pay on the Web, although that’s mainly a factor of me not buying anything online in the past two weeks aside from one quick Amazon purchase. The new auto-categorization features in Photos sound neat but can’t help the overwhelming majority of my photos taken on my Android phone, which never even show up there. The same goes for the souped-up conversation options in Messages (did I mention I use an Android phone?).

Things unfixed or newly broken: Sierra seems as powerless as its predecessor OS X El Capitan when Safari or Chrome decide they want to gobble up every last morsel of memory on the machine. I sure do wish this operating system would remember that
pre-emptive multitasking” was one of its foundational features. It also annoys me that Photos persists in the user-hostile practice of discarding the title, description and location I added earlier to a photo when I try to export it to Flickr.

Meanwhile, Sierra has broken the GPGMail plug-in I use to encrypt and decrypt the occasional e-mail–something I only realized after I’d installed this OS on both Macs. I e-mailed the developers and got a reply explaining that Apple made non-trivial changes to the Mail app’s internal code (I wouldn’t have guessed, since Mail seems as glitch-prone as ever) that they realized late in the game would require rewriting the plug-in. So if you were going to send me an encrypted e-mail critiquing this post, please hold off until they can ship a Sierra-compatible beta.