If you’ve been meaning to ask me “say, when are you ever going to update the Wirecutter guide to smartphone wireless service?”–that is what took up a good share of this week. So if you want to spring an intensely involved question about wireless rate plans, I’m now much better positioned than usual to answer it.

The Arabic-language news channel had me on to explain a federal appeals court ruling that President Trump can’t block people from following his Twitter account. I think the court was right to rule that by using this Twitter account to announce government decisions, Trump turned it into a government outlet… but my bigger issue with Trump’s Twitter presence remains its ignorant, hateful and bigoted content. 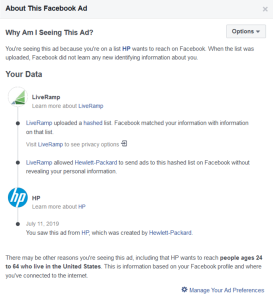 I wrote this post in about an hour Thursday at a privacy conference hosted by the U.S. Chamber of Commerce. That event fortuitously featured an executive from one of the data brokers revealed to me by Facebook’s new ad-transparency feature (as seen in the screengrab at right), and this LiveRamp executive’s talk gave me a couple of good quotes with which to end the column.

I returned to AJ to provide some context on the widely-reported move by the Federal Trade Commission to fine Facebook $5 billion for its failings in the Cambridge Analytica data heist. My main points: That’s a huge amount of money compared to past FTC actions, but it’s nothing to Facebook, so we’ll have to see what conditions and restrictions the FTC imposes with that penalty.