This list excludes one other job I did this week: Edmunds.com had me give an opening talk for their annual Hack Days conference at the car-news site’s Santa Monica, Calif., offices. I spoke about transitions afoot in how we connect our phones to our dashboards, how we shop for new and used autos, and the ways vehicle-sharing services might reduce the need for individual car ownership. The video should show up on YouTube eventually, but for now you can read the list of related resources I posted in lieu of inflicting a PowerPoint deck on my audience.

For an August blog post, a vacation-minded summary of the things I’ve learned from traveling with technology for work seemed like a good idea. I didn’t realize I would get a reminder of my own advice about the perils of airport WiFi Friday morning, when I found both LAX’s WiFi and T-Mobile’s coverage equally useless in a large chunk of Terminal 7.

I started this review maybe two months earlier, but kept pushing it back as breaking news interrupted things. Those delays allowed me to try improved releases of each of these alternative Android keyboards–and to see that Android phone vendors still feel it necessary to sink good money into replacing the perfectly good keyboard they get for free from Google with their own awful software.

Since this review ran, two or three readers have recommended yet another aftermarket onscreen keyboard, TouchPal. Should I should check that out next?

This piece started with a question from my wife about an alert on her iPhone about insufficient iCloud backup space, but I knew the situation was widespread after reading a memorably-headlined post by BuzzFeed’s John Hermann. The post also recaps advice posted here last summer about forcing OS X to show your Library folder; credit goes to Apple’s Mountain Lion for keeping this foolish default and making the tip relevant again.

I ended this week with two more stories filed beyond those listed below, so next week’s version of this post should make me look busier. 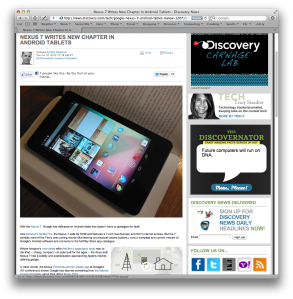 I finally found an Android tablet I like–and, indeed, will probably buy. (Like everybody else who attended Google’s I/O developer conference, I got a Nexus 7 for free, along with a  Nexus Q media player and an unlocked Galaxy Nexus phone; as a journalist, however, I had to sign an agreement confirming that all these products are loans due back Dec. 31, and I will honor that commitment.) This review has one error I’ve since corrected: The Nexus 7 includes the Google Wallet app, even though a search for that app in the Play Store didn’t show any results and I stupidly didn’t think to check the apps list on the device itself.

Since this post went up, I’ve seen a few reports on Twitter from other tech journalists who say their Nexus 7 review units won’t charge, or won’t charge over anything but the tablet’s own charger. I didn’t have that experience–having seen how an iPad can slowly replenish itself off a generic USB charger even when it says it’s not charging, I figured that the Nexus 7 would follow that pattern and saw that it did. But should I have spelled that out explicitly in the review? Should I add that detail now?

7/13/2012: What Your Phone Owes Your Next Computer, CEA Digital Dialogue

My not-entirely-pleasant experiences trying out an advance version of Windows 8 and living with Apple’s OS X Lion led me to write this reassessment of the wisdom of making our desktop operating systems more like the software running our phones and tablets. I see some clear-cut improvements–app stores, for example–but also serious downgrades (touch-first interfaces). And even the positive steps can be undermined by other things OS and third-party software vendors do (see, for instance, the extra steps Mac developers have to take to meet the Mac App Store’s “sandboxing” security requirement).

Last week’s massive breach of user-account credentials at Yahoo’s Yahoo Voices site gave me an excuse to revisit older advice on generating and saving passwords that both resist guessing and cracking attempts but can also be memorized by normal human beings. The column wraps up with a reminder to enable the site-wide encryption option offered by Facebook and Hotmail, but not yet the default at either site.

My review of Mac OS X Lion for Discovery News represented a departure from long-standing practice: For the first time in maybe a decade, I reviewed a new Apple operating-system upgrade by installing it on my primary computer, not an expendable review machine.

As you can read in that writeup, the installation went fine on my late-2009 iMac, and I consider Lion to be a good deal overall. But I also disliked enough of Apple’s changes to prior Mac behavior that I found myself quickly undoing these new defaults–which is another thing I traditionally haven’t had to do with a Mac upgrade. Here are my major corrections: 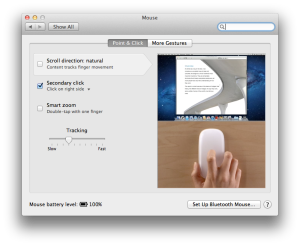 Tame scrolling and zooming behavior. By default, Lion imposes two iOS aspects on OS X, “reverse scroll” and “smart zoom.” The former has you flicking two fingers in the direction of scroll on a Mac laptop’s trackpad or a Mac desktop’s Magic Mouse, as if either were the screen of an iPad or iPhone–i.e., the opposite of how you’ve scrolled on a computer until now. The latter zooms into a window if you tap two fingers on either input device–which I found myself doing unintentionally way too often. Fundamentally, I think you need a different user-interface grammar on a computer and a touchscreen mobile device. As long as the computer requires you control it through indirect manipulation–that is, by touching something besides the display–the mobile model breaks down. If you agree, you can undo both of Apple’s changes in the Mouse and Trackpad panes of System Preferences. 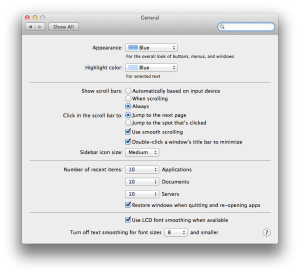 Show scroll bars. In general, I appreciate Apple’s willingness to edit out complexity and pare things down to the minimum. But hiding scrolls bars until you start to scroll with the mouse or trackpad seems an enormous mistake. In long documents, I felt lost and kept gesturing with the mouse to force the scroll bar to resurface. The effect was even more annoying in Web forms on a page and in other cramped, scrolling-required boxes. And to what benefit–to save a few pixels of screen real estate on the right edge of the window or form? No thanks, Apple. I’ll live with that clutter if it stops me from reflexively twitching a finger on the mouse every few minutes. To undo that mistake, click the button next to “Always” under “Show scroll bars” in the General pane of System Preferences. 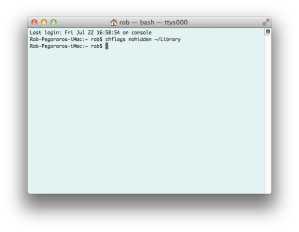 Make the Library folder visible again. Apple somehow elected to copy one of Microsoft’s stupider interface decisions by hiding the Library folder in Lion. This is where your applications store their preferences, supporting files and some of their data–and it’s far more human-readable than the tangled array of hidden “AppData” sub-folders in Windows 7 that Microsoft hides from its users. Many common troubleshooting routines require access to your Library’s contents, but Lion hides the entire folder from view. To make it visible again, open the Terminal app and paste in the following command, then hit Enter:

(That comes from a TidBITS post, but there are other ways to get at this folder. Macworld offers a full 18 workarounds.)

I may adjust more of Lion’s defaults as I get more familiar with this operating-system upgrade. I can also think of other changes I’d make on a laptop–for instance, setting Lion to show a messages when then screen is locked, then maybe adding Boxee to replace the Front Row media-browsing software Apple excised from OS X. But for now, these are the big three fixes I’d make to any Lion installation. What’s on your own list?