If you were going to look up any of the tech-guide stories I wrote for Gannett’s NowU last year, don’t. NowU has become more like NotForU: Gannett stopped updating the site in the spring and shut it down a few weeks ago.

This wasn’t the first time I’ve had my work vanish from the Web. My blog posts for the Consumer Electronics Association evaporated after a CMS switch, and all of the short updates I wrote for Sulia disappeared when that site closed. This time around, however, was better in one important way: My editor e-mailed me in late April to give me a heads-up about the impending closure of the site.

That note gave me more than enough time to save my stories as PDFs. At CEA, I had to rely on Internet Archive copies when management there let me repost some of those pieces here. At Sulia, I had neither a backup elsewhere on the Web nor advance notice of its demise, not that I was going to try to reproduce a few hundred microblog entries.

(The Internet Archive couldn’t preserve my stories at Gannett’s would-be hub for 45-and-over empty-nesters because NowU’s site was apparently coded to block it. That’s not how I would have run things, but there’s nothing I can do about it now.)

What I’m left with, then, is the enjoyment I derived from researching and writing those stories, the new sources I discovered in the process, the (generous!) payments that arrived on time–and, not least, the chance to sell stories about those topics all over again. If you’ve got a freelance budget and could use a how-to about WiFi and travel, international smartphone roaming, TV technology, or cutting the cord, please get in touch.

The Consumer Electronics Association recently moved its Digital Dialogue blog over to a new content management system. That wouldn’t be a news item to me, except that when CEA switched its blog to the same CMS that runs the rest of the site, they elected not to bring over entries older than November.

That means that along with CEA posts going back to the blog’s debut in March 2008, all of my own work there has gone down the bit bucket. (That’s not the first time this kind of link rot has happened; when Discovery News changed CMSes and redid its design in January, my car2go review somehow vanished; they were able to repost it, but not at the same address.) That’s not what I would have done; it’s also not my server.

You can still find most of my CEA contributions through the Internet Archive, but only if you know the original address of each. So I asked the folks at CEA if they’d mind me reposting some of that stuff here–I had to ask because my contract, like too many freelance arrangements, had a “work for hire” clause assigning copyright to them–and they said that would be fine as long as I noted where and when the work first appeared.

I said “some” and not all because I don’t have the time or motivation to rescue 50-plus contributions, not all of that material retains its relevance, and some of it is, you know, not that good. Four I have in mind: a December 2011 post unpacking the odd ritual of granting exemptions to the Digital Millennium Copyright Act’s anti-circumvention clause, an April 2012 rant about how “digital rights management” restrictions in e-books preserve Amazon’s dominance, a June 2012 confession of how I overestimated the appeal of the DVD recorder, and a July 2012 protest against sacrificing compatibility or connectivity to make phones and laptops fractionally smaller or thinner.

But if there are others you’d like to see restored here, please let me know. To help with that, I’ve gathered a more-or-less complete list after the jump of the posts, podcasts and chats I did for CEA, with Internet Archive links when available.

END_OF_DOCUMENT_TOKEN_TO_BE_REPLACED 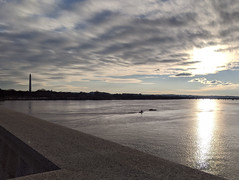