This was not a good week for productivity. The inauguration took out Monday, and a couple of late nights for inaugural festivities made the cold I was already feeling a lot worse. Then caught a glancing blow from some kind of stomach bug that left me uninterested in eating for 20 hours or so.

I could take notes and socialize at the events I went to Tuesday and Wednesday–washing my hands all the time to try to avoid sharing my illness–but I didn’t have the strength to write anything once I got home. And while I did file two things I’d been working on for the Disruptive Competition Project blog Friday afternoon, neither was posted. Hence the total of two headlines on this week’s list. 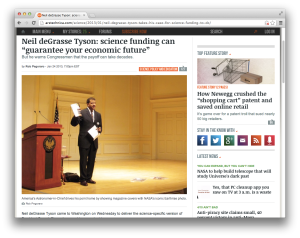 My NASA Tweetup connections led to an invitation to a talk by one of America’s favorite astrophysicists to mark the launch of a new House Science and National Labs Caucus; then I wrote up his lecture and Q&A for one of my favorite tech-news sites. I tried to put his talking points into the political context of how hard it can be justify government funding of any new projects.

In the process, I had to leave out some notes about the sense of humor Tyson displayed, such as a comment about the compatibility of astrophysics’ shorter words with hip-hop lyrics (“I can’t rhyme with orthoclase feldspar or deoxyribonucleic acid”). So if the post makes him sound like a scold, that’s on me.

I knew iCloud didn’t act like other Web-based file-storage services, but I didn’t realize how much it departed from OS X’s traditions until I stumbled across the one easy way to move multiple files from iCloud back to a Mac–using iCloud file dialogs. The column also includes a tip on making Mountain Lion’s Notification Center less intrusive.