I spent a little time checking out Apple’s new MacBook Pro today, and from my cursory inspection in an Apple Store I can confirm that it’s a very nice computer. It’s also an $1,800-and-up computer, and I am not an $1,800-and-up shopper in this category of hardware. 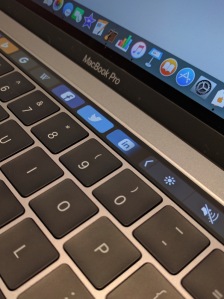 I’m more of a $1,000-ish guy, and Apple doesn’t seem to want such a small sum of money. At that price, the company has nothing new to offer–the MacBook Air saw its last update 621 days ago. But Apple continues to price that model as if it were new.

(I’m not counting the single-port MacBook, because a computer that makes me choose between recharging itself and recharging my phone will never work for CES.)

While Apple neglects the more-affordable end of its laptop lineup, Windows vendors have been doing some interesting work. Many Windows laptops include not just touchscreens but the ability to fold up the laptop into a tablet for easy economy-class use.

And some Windows laptops also include Windows Hello biometric login–like the TouchID authentication on the MacBook Pro, except you don’t have to pay $1,800 for it.

All this means that my next laptop is far more likely to be something like a Lenovo Yoga 910 or an HP Spectre x360 than a Mac. That feels weird–I’ve been buying Macs as a primary computer for over two decades--but to ignore what’s happening on the other side of the fence would make me less a shopper than a supplicant.

The other weird thing is, what I think I’d miss most from the Mac is a feature that’s seen little attention from Apple over the past few years: Services. That little menu you see in each app and when you right-click items in the Finder saves me an enormous amount of time each occasion it provides a two-click word count or image resizing. If only Apple would know this exists…

Meanwhile, Windows 10 suffers the embarrassing defect of not allowing separate time zones in its calendar app. Microsoft, too, shows no signs of being aware that this problem exists.

So if I get a Windows machine, how much will I regret it? If I get another MacBook Air, how much of a chump will I feel like for throwing even more money in Apple’s direction?