I’m through the worst of what I’m not-so-fondly calling Conference Month, and all of this travel is reminding me of the tasks that await each time I come home and finish unpacking.

As I write this, there’s a stack of business cards on my desk and several dozen pictures in iPhoto that have not been edited, geotagged, captioned or shared. And I only have five days before my next work trip, the Online News Association’s conference in Los Angeles, so you can imagine how well this is going.

Conference organizers, maybe you could find other months to host your events?

I’m thankful for readers who look for my work, and for clients who pay well and on time. You?

11/25/2014: Is the Uber Problem Changing How Startups Treat Privacy? Not Much., Yahoo Tech

Halfway through the Demo conference two weeks ago, I worried that I wouldn’t have anything to write about. Then I remembered that the founders of most new startups actually say what they think, unlike their more seasoned, better-media-trained counterparts at older tech companies.

I feel a tiny bit dumb for writing this more than two years after getting religion about two-step verification. In my defense, I almost never use iPhoto’s shortcut to e-mail photos from that app, so it fell to my wife to run into and ask me about a password-management glitch in that soon-to-be-retired app that Apple probably won’t fix.

I guess I don’t have to drag the icon for Apple’s Mail program out of the Dock after all.

An update shipped Thursday fixed the ugly Gmail-synchronization bug that I had been displeased to confirm in OS X Mavericks. Until then, I was about 90 percent sure that I’d have to dump the e-mail app that had been my daily driver since abandoning Eudora on the Mac at least a decade ago.

The likeliest replacement was Airmail, except its lack of support for the nifty data-detectors feature that lets me create calendar events from mentions of dates or times in messages had held me back.

Also, I’m really slow to move from one app to another, to the point that seemingly minor feature requirements like that become an enormous obstacle.

I still have Safari as my default browser in OS X, even though Chrome does a lot of things better–aside from automatically filling in contact information from my Contacts entry. And I continue to use iPhoto for my pictures, despite its glitches and Apple’s apathy about fixing them (although with 55 GB of photos, moving to a new photo-management app would be a non-trivial endeavor).

About the only major app that has exited my workflow in recent years is Microsoft Word. But since I’d have to pay for a no-longer-so-current version of that–while either Google Docs or TextEdit augmented by WordService provide all the tools I need for my formatting-free writing, leaving Apple’s Pages sufficient for the occasional venture into graphic design–that was a much easier call to make.

What was the last program you fired for cause? Tell me about it in the comments.

I spent the workweek in San Francisco–as in, my flight left National Airport at 8 a.m. Monday, and my flight home landed at Dulles around 6:30 p.m. Friday. Next week will also involve a long commute: I’m off to Las Vegas tomorrow for the CTIA 2013 wireless trade show.

5/13/2013: Your Brand Message Sucks: How to Pitch Your “Amazing” Product to Journalists, Influence HR

I spoke on a panel with Reputation Capital’s Mary Ellen Slayter, the Starr Conspiracy’s Lance Haun and Angles PR’s Ania Kubicki about good and bad ways PR types can deal with the press. (What was I doing at an HR-oriented conference? Mary Ellen’s an old friend from the Post and invited me onto the panel.)

I talked to WTOP about Google’s I/O news on Wednesday, but that interview doesn’t seem to have been preserved on the station’s index for that day. Drat!

5/16/2013: Google Probably Knew About This Post Before Me, Discovery News

The headline for this Google I/O recap popped into my head almost fully formed. I’m glad the editors stuck with that; I’m a little disappointed nobody picked up the Suzanne Vega reference in the excerpt that shows up in search results and on D News’ home page.

I was interviewed again that evening–this time at a press reception, along with USA Today’s Ed Baig, by Thai tech journalist Chatpawee Trichachawanwong. I don’t know if that piece has run, or how insightful Ed and I might sound in it. (We didn’t have much time to prepare.)

Here, I tried to put Google’s developer-focused I/O news in the context of iOS’s continued lead in one important area: profit potential for the average developer.

A question from a relative looking to prune the assortment of photo apps on his laptop led to this column. It also includes a tip about the difficulty you may have sharing some of the neater multimedia-enhanced photos your phone’s camera can take.

Most of this week’s posts on Sulia covered particular I/O announcements or sessions–for instance, a talk on Android’s design principles, an upcoming fix for buggy Bluetooth, an uncertain detail about Google’s stock-Android version of Samsung’s Galaxy S 4–but I also reviewed the Lyft and SideCar ride-sharing services and described my experience being served, slowly, by a robot bartender.

This time of year can bring the potential for serious college-hoops distraction–but not for me, since I was relieved of that worry Friday night. No, I’m not bitter…

3/18/2013: With so much fragmenting, is Android still a single OS?, IT Knowledge Exchange

My friend Ron Miller quoted me at some length in a post about the state of the Android union. Does the linguistic metaphor I chose to describe things work for you? 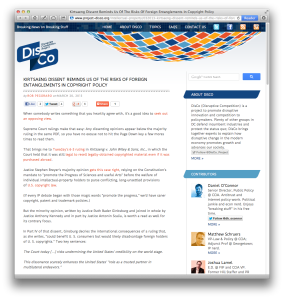 3/20/2013: Kirtsaeng Dissent Reminds Us Of The Risks Of Foreign Entanglements In Copyright Policy, Disruptive Competition Project

The Supreme Court said the first-sale doctrine–the idea that once you buy a copy of a copyrighted work, you actually own that copy and can loan it, sell it or donate it as you wish–doesn’t evaporate if the copy in question was published overseas. I liked that ruling; in this post, I argued that the dissent to it unintentionally exposed some non-trivial flaws in how we construct copyright policy. I enjoyed this rare chance to dust off my Georgetown education in international relations and law.

I thought Microsoft was smart to follow Google’s lead in documenting how many inquiries about its users it gets from law enforcement around the world–and that other tech companies should learn from this example.

I was back on this podcast for the first time since last July, and this time the chatter focused heavily on drinking. I assure you that there were serious intellectual-property dimensions to that part of the conversation I had with fellow guest Ali Spagnola and TWiL hosts Denise Howell and Evan Brown.

(Fun fact: Until writing this, I didn’t realize that my phone includes ringtones by Spagnola.)

I was a little worried that my Q&A about dealing with iPhoto database corruption was a little esoteric, but then a reader commented on my Facebook page about her substantially-worse experience: “My entire database was corrupted [….] I had masters and edited pics existing in different places.” There’s also a reminder about not letting a phone’s geotagging function expose where you live.

On Sulia, I quoted approvingly from the Supreme Court’s Kirtsaeng ruling, explained why I’m not too interested in Google Keep, gave some early praise to Microsoft’s transparency report (that item got a mention on Slashdot), and commented on the fallacy of complaining about “taxing Internet sales”