After a week out of town, I have seriously enjoyed waking up in my own bed and cooking my own meals.

My sideline as an occasional Twitter-chat host led me to this discussion of ways to secure large numbers of smartphones and tablets–a business-focused topic with more than a little relevance to the consumer. 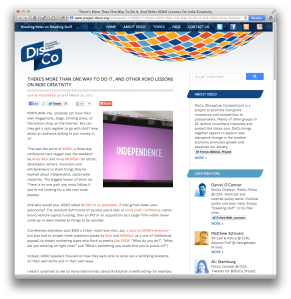 9/26/2013: There’s More Than One Way To Do It, And Other XOXO Lessons On Indie Creativity, Disruptive Competition Project

This recap of the XOXO conference was written from about the same perspective as July’s  DisCo post about developments of online journalism: You’re better off judging the health of a market by its compatibility with middle-class business models than by how many superstars it spawns.

I set aside another column idea to write about user complaints about the sometimes shifty visual effects in iOS 7. The tip part of the column, about one way to decide if an Android developer is being upfront with you, came out of a discussion I had at the Privacy Identity Innovation conference two weeks ago.

The week’s Sulia topics ranged from the official debut of a CableCard bill that I’d previewed for Ars Technica in August, surprising sales figures for Chromebooks, RealNetworks’ re-emergnce with an interesting cloud-based video service that may suffer from being saddled with the RealPlayer name, how many people pay for ad-free versions of mobile apps, and a time when paying with a credit card entailed more hassle than paying with my phone’s NFC wireless might have been.