Another weekend in which I did not get as much down time as I’d hoped, courtesy of some additional work coming my way. So goes freelance life sometimes… although I remember the same thing happening, without any extra income, when I was a full-time employee.

When we posted this story, we all thought municipal broadband would get at least as much of a mention in the State of the Union address as space exploration. Then that didn’t happen. Oops.

Sometimes, I struggle with columns. Not this time: I wrote the whole thing in basically one take, and I had fun doing it.

I spent about 45 minutes Friday and Saturday hearing a parade of startup founders take three minutes to explain their idea, answer my questions and ask some of their own. As in prior years when I’ve participated in this part of the D.C.-area “entrepreneurship community” Fosterly’s conferences, I came away reminded of how impressive it can be to watch somebody excel at in-person sales, and how often that doesn’t happen. 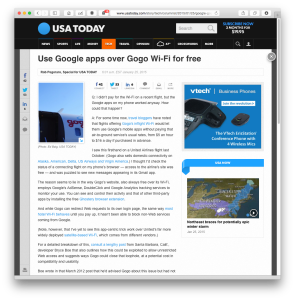 I got the idea for this on a flight last October, but I held off on writing it up until I’d had enough conversations with enough people at Gogo to be reasonably confident that publicizing this loophole wouldn’t ruin it for everybody. The tip at the end of this avgeek-oriented column about using an Android phone’s GPS on a plane should be familiar to those of you who followed my microblogging experiment at Sulia. But since that startup’s shutdown last October wiped those posts off the Web, I’ve felt no guilt about recycling the ideas behind them.