Most weeks, I get this recap written and posted sooner, but instead I’m doing it as Sunday draws to a close and I have another story yet to write. But you’re not going to get me to say I regret taking a nap this afternoon. 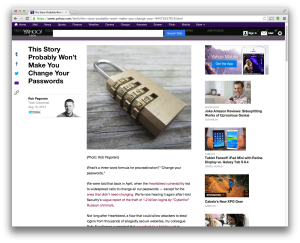 I really enjoyed coming up with the concept behind this photo–and was then a little disappointed that nobody seemed to pick up on my setting the combination on the lock in the photo to the “leetspeak” of 1337.

8/12/2014: A Cheat Sheet for Securing Your Accounts with Two-Step Verification, Yahoo Tech

The latest in a growing series of posts explaining two-step verification. As one reader quickly noted in a comment, I should have included PayPal on list of major sites supporting this security measure.

Host Gene Steinberg and I talked about security scares and the potential of the smartwatch.

A while back, a friend posted an apology on Facebook for the spam that had gone out from his Google account. I asked if I could look into his case, and this column is the result.

This was a multiple-microphone week, and two of my three broadcast appearances involved shows that hadn’t booked me as a guest before. That’s good.

In other news: Happy Easter!

A lot of material had to get left out of this already-long column denouncing the crony-capitalism campaign by Intuit and such Washington groups as Americans for Tax Reform and my former client CCIA to stop governments from letting citizens file and pay taxes at their own sites. (For example, these direct-filing sites cost little to run–$80,000 a year at California’s ReadyReturn, $150,000 for Pennsylvania’s soon-to-be-shuttered padirectfile.)  Comments debuted at Yahoo Tech late Tuesday afternoon, and as you can see I did not wait long to show up in them myself.

Speaking of feedback, you might as well see ATR’s latest post opposing IRS-run tax prep and stories, mine included, that suggest it would be a good thing… which, in a coincidence too weird for me not to disclose, was written by the guy who’s done my taxes since 2012.

The news network’s Arabic-language channel had me on the air to talk about Google Glass and privacy issues. Since I was being translated into Arabic in real time, the producer emphasized that I speak slowly and simply–a challenge when my usual habit is to speak too fast on the air. 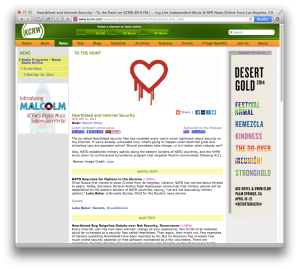 KCRW’s news show had me on to discuss the Heartbleed bug and how  open-source development broke down in this case. I wish I’d thought to compare major tech companies’ unwillingness to kick in any money to the OpenSSL Foundation with all the effort they’ve put into finding ways to pipe income to shell corporations in overseas tax havens.

Most of my input happened in the first 20 minutes or so, but keep listening to hear Internet Governance Project founder Milton Mueller discard some silly objections from the Information Technology and Innovation Foundation’s Daniel Castro to the government’s proposal to hand over supervision of the DNS root zone.

D.C.’s news station had me on the air for a few minutes via Skype to talk about Facebook’s new location-based option, its privacy implications and how it competes with such existing apps as Foursquare and the D.C. startup SocialRadar.

A relative’s question about whether he should buy a Chromebook for his online banking gave me an opportunity to note a couple of cheaper options to separate your Web financial transactions from your regular use: booting your computer off a Linux CD or flash drive, or using your bank’s app or the built-in browser on your phone or tablet.

For at least the last decade, I’ve been telling readers that open-source development matters and helps make better software. If everybody can read the code of an application or an operating system, there can’t be any hidden backdoors; if anybody can rewrite that code to fix vulnerabilities and add features, the software’s progress can’t be thwarted by any one company’s distraction, fraud or bankruptcy. 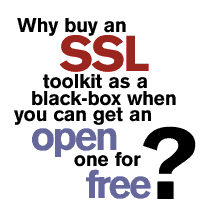 My glowing endorsement of Mozilla Firefox 1.0 in November 2004 set the tone:

…the beauty of an open-source product like this is that you can participate in its evolution. Firefox’s code is open for anybody to inspect and improve...

My experience using open-source software tells me this is true–even if that doesn’t guarantee a constant rate of improvement or an elegant interface.

And if any genre of software should benefit from this method of development, it ought to be code that Web sites use to secure their interactions with users from eavesdropping: Everybody sending or storing private information needs this feature, billions of dollars of transactions are at stake, and you don’t even have to worry about wrapping a home-user-friendly UI around it.

True, right? Except Heartbleed happened. Two years ago, an update to the widely-used OpenSSL encryption library added a “heartbeat” function that made it easier for sites to keep an encrypted session going. But it also harbored an disastrous vulnerability to buffer-overflow attacks that would cause a site to return 64 kilobytes of whatever happened to be adjacent in the server’s memory to an attacker: usernames, passwords, e-mail content, financial transactions, even the private key the site uses to encrypt the session. And the attacked site can’t check afterwards to see if it got hit. I defy the NSA to script a better hack.

And despite buffer overflows being a well-known risk with documented defenses, nobody caught this for two years. Two years! It took a Google researcher and engineers at the Finnish security firm Codenomicon to find the bug separately and report it to the OpenSSL team.

How bad is this? Ask security researcher Bruce Schneier:

It seems that everything that could go right in open source development went wrong in this case. As an excellent story from Craig Timberg in the Post outlines, the free nature of OpenSSL made it an obvious choice for hundreds of thousands of sites and something of a natural monopoly, that same enormous deployment of OpenSSL encouraged people to assume that they themselves didn’t need to inspect the code that carefully, and OpenSSL developers got so little financial support from the corporations relying on their work that they couldn’t even subject their code to a proper security audit.

The stupid thing is, we knew this could happen. See John Viega’s 2000 essay, “The myth of open source security,” in which he outlines how thousands of users failed to catch “a handful of glaring security problems” in code he’d contributed to the Mailman mailing-list manager:

Everyone using Mailman, apparently, assumed that someone else had done the proper security auditing, when, in fact, no one had.

That doesn’t mean that closed-source development suddenly looks better. (When all this is done, Microsoft’s proprietary and hideous Internet Explorer 6 may still have greased the skids for more successful attacks than OpenSSL.) But it does mean that selfishness/laziness/distraction and open source can become a toxic mix, one we should have seen coming.