Weeks spent wondering when I might next get on a plane turned into months–and then that wait ended a little after 7 a.m. Friday, when I boarded a flight from National Airport to Newark.

I had no personal or business appointment near EWR. I just had my habit developed over the last nine years of flying on Sept. 11–plus a stash of future flight credit on United with no imminent use, a growing despondency over my grounded status, an empty schedule Friday, and enough research to establish that I could take a day trip then on largely-empty planes for a reasonable fare.

Commercial aviation’s pandemic-wracked status made this short-notice jaunt possible, in that I didn’t book Friday’s itinerary until Wednesday. The price of procrastination was a little complexity: The cheapest itinerary that would let me leave my city and altitude and arrive home in time for dinner without brittle connections had me flying from National to Newark to Columbus back to Newark and then home to Dulles.

That’s a bit ridiculous, but as a card-carrying avgeek I could not turn it down.

The flights themselves were fine and seemed safe. I spent more time near more random people making my grocery-store visits this week than I did up in the air, and airplanes have much better air ventilation and filtration. It helped that my frequent-flyer status on United allowed my upgrades to clear on all four legs–but note that a seat up front doesn’t get you much more in these pandemic days than extra personal space. I kept my mask on except to have a beverage or a snack on each flight, and everybody near me did the same.

But the real reward consisted of the chances to appreciate the memorial United employees once again set up at EWR to commemorate the crews of UA 93 and UA 175, soak in the post-departure perspective of a Manhattan skyline that doesn’t match the one I knew up to Sept. 11, 2001, and treasure returning safely to one of my two home airports. 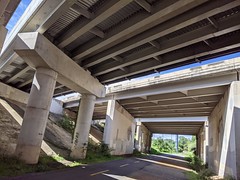