NEW YORK–I’m writing this much later in the day than usual, on account of having a late Saturday night of WHCD silliness that was followed by a prolonged and pleasant brunch hosted by my client Yahoo. And then the Acela’s WiFi, which has been pretty reliable lately, was barely usable, thwarting my hopes of getting this post done on the way up here: Up next: three days of startup demos, panels and keynotes at TechCrunch Disrupt.

I was one of a minority of journalists to not crucify FCC chair Tom Wheeler for his proposal to reconstitute a diminished set of net-neutrality regulations that would allow Internet providers to charge sites extra for faster delivery of their content. But I did say that the FCC had to do a much better job of explaining this idea and related proposals, which Wheeler then did in a blog post that afternoon.

After two friends had their iPhones stolen in D.C., I had to wonder when the ability of Apple’s Activation Lock to render a stolen phone permanently unusable would start to deter iPhone theft. This column also gave me a chance to note the wireless industry’s recent commitment to offer kill-switch systems for other phones.

I swear, sometime this month I will have the kind of lazy, do-nothing day that should be the right of every Washingtonian who doesn’t skip town in August.

I’d meant to write a post denouncing the Computer Fraud and Abuse Act in January–when Internet activist Aaron Swartz, facing the potential of a long CFAA sentence, committed suicide. I remedied that oversight when a judge’s opinion stated that using a proxy server to change your computer’s Internet Protocol address could be a CFAA violation. 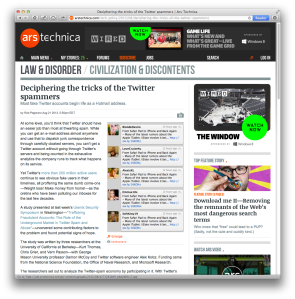 8/21/2013: Deciphering the tricks of the Twitter spammers, Ars Technica

After seeing a fascinating study of the Twitter spam market presented at the Usenix Security Symposium last week, I did a little more digging to write this recap.

This review already looks problematic–not even two days after it ran, the backlight on my loaner Nexus 7 seems to have died. Until I can figure out what happened (which will probably require Google to autopsy the device), don’t give my kind words about this Android tablet too much credence.

I gave a talk about how privacy issues get covered–often badly–by the tech and traditional media at this gathering of Washington-area iOS developers. This was not my best public speaking ever; I lost my place halfway through the talk and had to improvise for a bit. (My audience didn’t seem to mind, but things could have been much worse.)

This question seemed simple enough when a reader asked it several weeks ago, but then I realized it would give me a chance to discuss a few interesting, related topics. But in retrospect, I missed a chance here to call out phone vendors for charging too much for extra memory. There’s also a tip about Google’s new Android Device Manager lost-phone service.

My most important Sulia post this week reported the bizarre failure of the Nexus 7. Besides that, I critiqued Samsung’s announcement of a new Android phone with a 6.3-inch screen,   called out Amazon’s lack of a system-status page that might have better explained its brief outage this week, suggested a new Google patent application may have prior-art and obviousness issues, and complimented the new “Digital Commons” space at the District’s Martin Luther King, Jr., Library.