I had my name appear in boldface type below a photo of me on Wednesday (at the bottom of a recap about a book party I attended Tuesday), and on Saturday I finally ended my long streak of not posting any video clips on Twitter’s Vine service. Otherwise, it was a pretty quiet week, with much of my efforts going into stories that won’t surface until next week or later.

The outsized attention paid to Facebook’s 2012 experiment with manipulating the News Feeds of some users seemed misplaced after the Washington Post’s scoop Saturday that the National Security Agency has been not just collecting but keeping personal data about potentially hundreds of thousands of innocent Internet users. I was pretty confident that mentioning these two controversial topics in the same piece would yield hundreds of comments, but that did not happen. 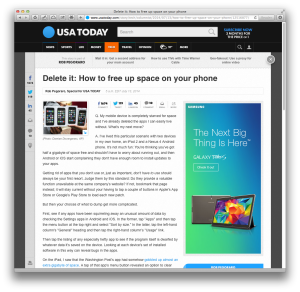 This column, meanwhile, did not strike me as telling people things they didn’t know–aside from, maybe, that an update to Twitter’s Android app fixes a horrendous storage-eating bug unmentioned in its eight-word release notes. And yet it’s gotten a ridiculous amount of Facebook shares, without the benefit any push from USAT’s own Facebook page. I’m not saying this to brag so much as to admit that sometimes, I have only a foggy idea of what motivates people to read or skip my stuff, much less recommend it to others. I should remember that the next time I’m thinking an editor’s suggestion for a story topic won’t attract an audience.

I sure wish July 4 would fall on a Friday more often–although I can deal with it landing on a Thursday too. 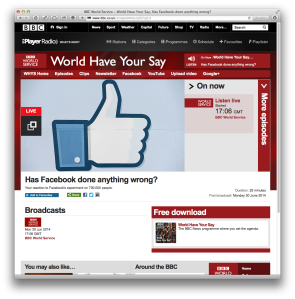 This BBC program (er, programme) had me on via Skype to discuss Facebook’s 2012 experiment in making about 690,000 users’ News Feeds slightly happier or sadder to see how they’d react. The restrained tenor of the conversation had me thinking this story would not be kicking around six days later; that was a mistake.

The Supreme Court released its Aereo ruling at about the worst possible time for me–the day after last week’s column ran, and right before the Google I/O keynote. But waiting until this Tuesday to opine allowed me to cover some subsequent developments and develop a comparison of that case with the court’s far more thoughtful treatment of a different tech-policy issue–whether police need a warrant to search the contents of your phone.

I contributed a couple of nominations to this listicle.

The news network’s Arabic-language channel had me on to talk about Facebook’s “emotional contagion” study. If you had a chance to watch it (sorry, I don’t think the clip is available online), did the live translation make me sound any smarter?

Shockingly enough, host Gene Steinberg and I did not discuss the Facebook experiment on this week’s episode of his podcast.

An exchange on the Internet Press Guild mailing list taught me this one weird trick with e-mail that had somehow escaped my attention until now, then led to this how-to column. As I type this, my link to the column from my public Facebook page has gotten vastly more engagement than anything else I’ve posted there lately, and I have no idea why. If only I could conduct some sort of study about people’s emotional responses to Facebook…