This week wasn’t really this slow: I filed two other stories that have yet to get edited and posted. 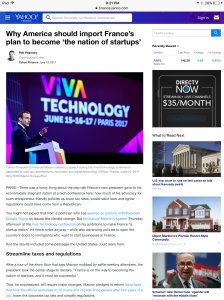 6/19/2017: Why America should import France’s plan to become ‘the nation of startups’, Yahoo Finance

I wrote up this recap of French president Emmanuel Macron’s Viva Technology speech on the flight home last Saturday. I’m pretty sure this is the first time I’ve had to use my not-totally-rusty French for a story: Macron spoke mostly in French, and the simultaneous English translation offered at the time fell behind at a few points, so I had to replay the speech to transcribe and translate some key phrases myself.

I’ve had this post on my to-do list for a while: One year after major cable operators had put forth a bold, reasonably consumer-friendly plan to offer subscribers free apps to take the place of rented cable boxes, I could point out how almost none of them have done any such thing. The 1,195 comments below the post suggest I may have struck a nerve.

I talked with host Gene Steinberg about my bootlooped Nexus 5X, Apple’s new iMac, why I wish Apple would finally update the Mac mini, and a few other things.

I tried to take Monday off and only partially succeeded, then got knocked down for most of the next three days by a completely-unsurprising CES cold. That event isn’t just a trade show, it’s a massively-multiplayer biological-warfare experiment.

On the upside, I managed to edit and caption enough of my CES photos to get a Flickr album started. 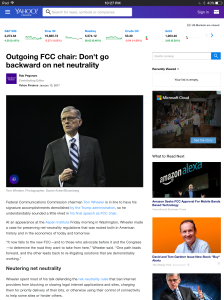 I finally emerged from my home Friday morning to bikeshare over to Dupont and see Federal Communications Commission chairman Tom Wheeler’s final address. The reporting challenge here was figuring out which sources Wheeler had cited without naming in his defense of net-neutrality regulations–one of which turned out to make a weak case for or against those open-Internet rules.

The reader e-mail I got right before CES addressed a topic I’d covered not even a year ago, but since then a Wheeler initiative to require subscription-TV providers to ship no-fee apps to watch their programming has died on the vine. And a pay-TV proposal (yes, signed on by DirecTV) to do much the same on a voluntary basis has yet to result in shipping apps. In DirecTV’s case, it hasn’t even yielded updates to add AirPlay or Chromecast video output to the AT&T-owned service’s existing apps.