The next few weeks will involve a lot of airplanes, starting tomorrow when I fly to Berlin for my fourth annual trip to the IFA electronics show there. I’m back on the 6th, then depart two days later for the CTIA wireless-industry gathering in Las Vegas. That will be a brief stay, as I move on to Portland on the 10th for the XOXO conference. A week and a half later, I’m off to L.A. for the Online News Association conference.

At least this travel schedule isn’t as insane as last September’s (when, for example, less than 24 hours separated the IFA and CTIA trips). But still: Conference organizers, maybe you could find other months to host your events? 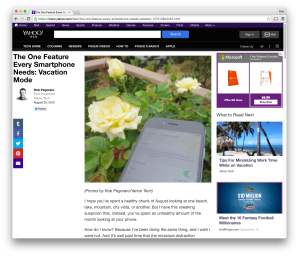 8/25/2015: The One Feature Every Smartphone Needs: Vacation Mode, Yahoo Tech

I wrote this essay, sadly enough, while on vacation. But I did leave time that day for a nap! Of course, half the comments were along the lines of “just turn off your phone.” Thanks, dude, that’s a really practical bit of advice.

Never mind–I was reading a syndicated copy of the story on the site of the St. Louis TV station KSDK but completely ignored the different header atop the story. Duh.