For years, I’ve been a bit of a curmudgeon about inflight WiFi. A seat on a plane was a refuge from an interrupt-driven lifestyle, a place where I could monotask for a change. 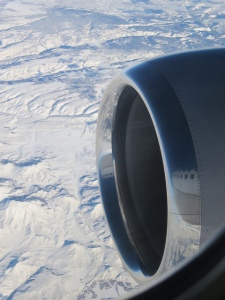 And besides, most first-generation, air-to-ground WiFi systems became unusably slow once enough people got on. In my limited experience, at best Gogo’s cellular technology yielded download speeds below 1 million bits per second–unacceptably slow 3G service on the ground. So why would I want to pay $16 or more for a flight’s worth of that?

Satellite-based WiFi can run much faster and works over oceans but is usually no cheaper over the duration of a flight.

Hourly pricing can make this a better proposition–I have paid Gogo’s $5 hourly rate on short flights, though I no longer do since I discovered that my phone’s Google apps work for free on its WiFi. But on its 737s, United Airlines offers hourly prices with a tweak that makes them more valuable to me: a pause button.

I can pay $3.99 for an hour of LiveTV’s satellite-delivered WiFi that actually works–download speeds have exceeded 24 Mbps in my tests–and then stretch out those 60 minutes by pausing it while I eat, nap, read, squeeze myself into the lav or take a moment to appreciate the wonder of occupying a chair in the sky. I can further extend my online time by opening up a batch of pages in new tabs, then pausing the connection to read them as if I were trying to save costs on a dial-up connection.

I can’t do that with Gogo, where you only buy a continuous hour of use. But I also haven’t seen this purchase option on United’s other WiFi-equipped aircraft; this airline’s inconsistent service (its A319s and A320s got WiFi before its 737s but still don’t have in-seat power) extends to a confusing mix of WiFi providers and pricing. I worry the company will “fix” this problem by taking away the pause button–but for now, that has me spending money I might otherwise not ante up.