Tuesday morning had me moderating a panel discussion, which made the workweek nothing out of the ordinary: I’ve done 20 or so panels so far this year. 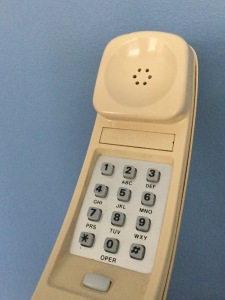 I enjoy the exercise–when you only have to ask interesting questions, call out any departures from the truth, throw in the occasional joke and try to end things on time, you’ve got the easiest job of anybody on the stage. But there’s one part I resent: the inevitable request by the event organizers that everybody get on a conference call first to discuss the panel.

If it’s just going to be me interviewing another person and we’re in the same time zone, this need not be too bad. But more often, you have four or five people with widely varying schedules.

That leads to a flurry of e-mails in which the panelists or their PR reps try to pick out a mutually agreeable time–instead of, you know, using the e-mail thread to discuss the panel itself.

The con call itself is likely to run on some 1990s phone-based system, not any sort of online app that would make it easy to tell who’s talking (pro tip: when on a con call, play up whatever regional accent you have). Using a text-based collaboration tool like Slack that would let people on planes or an Amtrak Quiet Car get in on the conversation never seems to come up.

Last month, the only time the organizers offered for the prep call was 5 p.m. on a Friday when I had to get to Dulles Airport for a flight later that night. I replied that this wouldn’t work and suggested we “use e-mail the way God intended,” then wrote up an outline of the talk as I would have needed to do even if I’d hacked out time for a con call. The panel went just fine.

So if you ask me to dial into a con-call service to talk about what we’ll talk about on a panel and I suddenly get cranky, please understand that I’m just trying to act as if we’re doing business in the 21st century.

I enjoy talking shop, but not so much when I first need to call a toll-free number, punch in a four-to-six-digit code, press the pound key, speak my name after the beep and be dumped into a cybernetic void in which I must wait to hear the sound of another human voice.

No, I’m not a fan of conference calls. Part of that is a common rationale–they allow a PR minder to be on the line and make sure nobody says anything too compromising–but, really, most of it is the exasperating user experience.

That starts with the con-call invitation, which inexorably arrives on my Mac as a blank e-mail consisting only of a “Mail Attachment.ics” file. OS X’s Quick Look won’t reveal its contents, so I must open it in Calendar to see that it contains the number, con-call code and time that should have been in the e-mail itself.

Make me open another program to see what you’re talking about in your e-mail? No.

To judge from the headers of these messages, this is a Microsoft Outlook-transmitted social disease–sending a calendar invitation from inside that sprawling program must not offer the sender any hint of how it will be displayed to a recipient. In my case, it’s badly: Not only does Mail for OS X throw up its hands, the Gmail app for Android doesn’t even show this file.

(And yet Mail for iOS displays a nifty calendar widget for those invitation messages. Apple’s inability to keep its desktop mail client at feature parity with its mobile mail client is a subject for a future rant.)

After the aforementioned routine of punching in numbers and waiting for a response, I often face an extra challenge in con-calls with more than one executive, or in which the publicist and the executive are of the same gender: figuring out which of two or three white guys is speaking at any one time.

And have I mentioned that this is the tech business? There are good, Web-based conference systems that let you connect by clicking a link and then make it easy to tell who’s there and who’s talking. I’ve used UberConference and it was terrific; I hear great things about Speek but haven’t used it yet (note that a friend works at that D.C.-based startup); video chat through apps like Skype, Google+ Hangouts, Vidyo or Rabbit works too, as long as I tidy up the parts of my home office within camera view.

And yet when a company wants to talk up its technological prowess, we must jack into the AOL chat room of group voice communication. PR friends, if your client insists on that routine, can you at least do me a favor and dial my phone directly before patching me into the call?