I got in a quick trip to New York this week, thanks to an invitation to speak at a conference at Columbia University that arrived after the event organizer read the Data Privacy Day piece I wrote for the Washington Post last month. 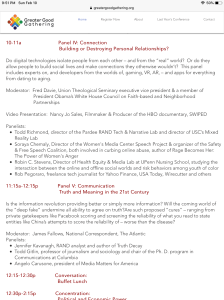 I talked about the problems and possibilities of social media–more of the former than the latter–with Fred Davie of the  Union Theological Seminary, the University of Southern California’s Todd Richmond, the Women’s Media Center’s Soraya Chemaly, and Robin C. Stevens of the University of Pennsylvania’s nursing school. My contribution to the discussion was suggesting that these social apps might be less amenable to abuse if their development teams weren’t dominated by people whose race and gender render them immune to the usual racist, misogynistic word vomit online.

2/8/2019: How you can report security problems to tech companies like Apple, Yahoo Finance

This post unpacking Apple’s delayed response to a 14-year-old’s discovery of a serious vulnerability in Group FaceTime–which looks pretty good compared to how many companies handle “vuln” reports–went through a couple of post-publication revisions.