I got a little extra publicity this week from the Columbia Journalism Review when its editors illustrated their open letter to President Trump from the White House press corps with a photo I took of the White House press briefing room. It’s been flattering to see that people actually read photo credits! I would have liked to see CJR link to the original–I believe that’s a condition of the Creative Commons non-commercial-use-allowed license under which I shared it on Flickr–but the reply I got was that their CMS doesn’t support links in photo credits.

That photo, incidentally, comes from 2014’s White House Maker Faire–exactly the sort of event I don’t expect to get invited to over the next four years.

I talked with Techdirt founder Mike Masnick about my experience at this year’s show. I did the interview using a podcasting Web app I hadn’t tried before, Cast. My verdict: great UX, but that name is horrible SEO.

I finally wrote a story for a magazine I’ve been reading on and off since high school, which is pretty great. The subject: the United Airlines Fleet Website, a remarkably useful volunteer-run database of United planes that I’ve gotten in the habit of checking before every UA flight. The story should also be in the February issue, available at newsstands in the next few days.

1/18/2017: What you should really know about every major hacking story, Yahoo Finance

I put on my media-critic hat to write this post about what too many cybersecurity pieces–and too many mass-media conversations on the subject, up to and including those started by Donald Trump–get wrong.

We decided last summer that having separate guides for the four major wireless carriers and for prepaid and resold phone plans didn’t help readers who should be considering all of their options. That also imposed extra work on me. The result: a single guide that’s much shorter and will be easier to update the next time, say, Sprint rolls out some new price plans.

The real test of the big four networks came not during President Trump’s under-attended inauguration but the Women’s March on Washingtoh the next day. To judge from the experience of my wife and others, the carriers did not acquit themselves too well: Her Verizon iPhone lost data service for part of the day, and I saw friends posting on Facebook that they couldn’t get photos to upload.

T-Mobile’s decision to limit its postpaid offerings to the unmetered-but-not-unlimited T-Mobile One gave me an opportunity to provide a quick tutorial on the differences between postpaid, prepaid and resold services.

I took the same laptop to CES for the fifth year in a row, which is not the sort of thing you should admit at CES. I’m blaming Apple for that, in the form of its failure to ship an affordable update to the MacBook Air, but 2016’s Windows laptops also failed to close the deal.

My mid-2012 MacBook Air did not punish my hubris by dying halfway through the show and instead was content to remind me of its battery’s age by running down rapidly once past 25 percent of a charge. Seeing a “Service Battery” alert last fall had me thinking of getting the battery replaced beforehand, but my local Apple Store’s diagnostic check reported that I could hold off on that for a little longer.

When I had to recharge my MacBook, nearby attendees could also guess its age from the black electrical tape I had to apply to its power cord to cover a frayed area–yes, this is the power adapter I bought not even two years ago. In any darkened room, they might have also noticed the glow coming my from my laptop’s N key, on which the backlight shines through now that this key’s black coating has begun to rub off.

My Nexus 5X Android phone, my other note-taking device, kept bogging down as I was switching from app to app. If I could upgrade the RAM on this thing, I could–but, oops, I can’t. Its camera, however, once again did well for most shots, and T-Mobile’s LTE held up up except for press-conference day at the Mandalay Bay Convention Center.

WiFi was once again atrocious. I’m not surprised by this, only that the Consumer Technology Association tolerated this kind of crap connectivity at its most important event.

Cute to name this CES press-room WiFi network "darthvader," but it's exhibiting the same resilience as Stormtrooper armor.

Two hardware items I know I can and should easily replace before next year’s CES are the USB charger I took for my phone and my travel power strip.

The remarkably compact charger that came with my wife’s old Palm Pixi almost 10 years ago still functions as designed, but it doesn’t charge my phone fast enough. I only took that item to Vegas because I lost the charger that came with my Nexus 5X (yes, the one I almost misplaced last year at CES) at Google I/O. I should have packed my iPad mini’s charger, which replenishes my phone much faster, but I won’t mind buying a cheap, fast-charging, two-port USB charger. Any endorsements?

My travel power strip also charges USB devices slowly, but the bigger problem is this Belkin accessory’s relative bulk. The Wirecutter now recommends a more compact Accell model; remind me to get that sometime soon.

I’d written last year that I probably wouldn’t take my aging Canon 330 HS point-and-shoot for another CES, but I did anyway. I experienced my usual wishes for better low-light performance and the ability to touch the screen to tell the camera where to focus, but this camera’s lens cover also no longer closes without me nudging its plastic petals into place.

I should have spent more time at CES checking out replacements, but I only had time to verify that the Canon pocket-sized model that looked most appealing doesn’t take panoramic photos.

I wrapped up the tech-journalism hell week that is CES with a red-eye flight out of Vegas last night, as if I wasn’t tired enough after writing close to 6,000 words of copy and doing two panels, one radio interview and one on-stage intro. So if you’re hoping for typo-free prose, this may not be the post for you.

1/3/2017: The biggest busts from the world’s most renowned gadget show, Yahoo Finance

I enjoyed writing this reality-check post about past flops at CES–some of which I thought at the time could fly.

You may have seen my column on alternatives to paying Evernote and iCloud appear a few days earlier in a personal-finance section that I’m told ran in some Gannett newspapers.

1/3/2017: What to expect this week at CES, the world’s biggest gadget show, Yahoo Finance

This was the second post I filed on Monday–you know, the day that was supposed to be a holiday.

I attended the unveiling of this self-driving, electric-powertrain supercar Tuesday night and did not find the overhyped “reformat the future” sales pitch super-persuasive.

I talked with WTOP’s Shawn Anderson and Hillary Howard about early headlines from the show. We usually do these interviews over Skype, but bandwidth was so bad that they had to call my phone.

I talked about the changing landscape of cybersecurity with Blackberry chief security officer David Kleidermacher, HackerOne CTO Alex Rice, and Qualcomm senior director of product management Sy Choudhury. One big takeaway of our discussion: Companies and organizations that don’t want to talk about their security misfortunes aren’t the ones you want to trust.

This piece ran over a thousand words in my first draft, which is not an optimal writing strategy when you have a CES-dense schedule.

I finished and filed this from a chair near an entrance to the Venetian at around 6:30 Friday night, which is not generally part of people’s weekend activities in Vegas.

I inflicted some dead air on the organizers when I forgot that they’d moved up my introduction of this panel by 15 minutes. After that awkward start, I had a good conversation about ways customers can become empowered custodians of their own data with executives at companies trying to make that happen: digi.me founder Julian Ranger, MatchUpBox CEO Didier Collin de Casaubon, Meeco founder Katryna Dow, and Universal Music CTO Ty Roberts. Update, 2/6: MEF posted audio of our conversation.

I helped judge this competition (irreverently emceed by my Yahoo colleague David Pogue), then jumped on stage to introduce the app I’d evaluated, Intel Security’s True Key. My summary of its use case: “You all suck at passwords.”

1/8/2017: How to stay online in impossible circumstances, USA Today

My editor suggested I use my column to share lessons learned from CES about preserving  the battery life and connectivity of mobile devices in phone-hostile environments like the gadget show. I should have known that the press-room WiFi would crap out as I was trying to write this Friday afternoon, leaving me to limp along on the Las Vegas Convention Center’s insultingly-limited guest network.

I filed this from the United Club at McCarran at around 11, which is also not how people normally spend a weekend night in Vegas. 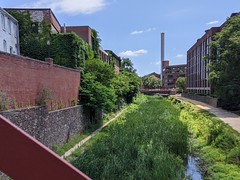