If you’re going to have a bunch of long-in-the-works stories finally post, you could pick a worse time than the week you’re at a journalism conference. This coming week has me at a different event: the Competitive Carriers Association’s conference in Providence, where I’m moderating a panel discussion on 5G wireless in rural areas. (Yes, readers, the title of that panel is 100 percent my fault.)

USAT took a day or two to post this, for which I was grateful–that lag gave me time to remember to throw in a quote that I’d forgotten to include when I first filed this last Sunday morning before flying home from Berlin.

This story started with the panel I moderated at a conference this this trade pub hosted outside of Denver in May, hence the above long-in-the-works comment. 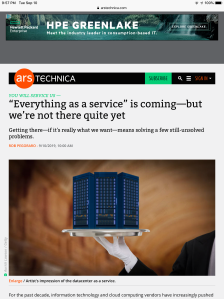 Some of you saw this feature on cloud services briefly appear last week before it vanished without explanation. As Lee Hutchinson, senior tech editor at Ars, later explained in a comment, the story got posted early by mistake. Yes, that is apparently a thing that is possible.

Since the first instance of this story didn’t feature any ads from its sponsor HPE–Ars correctly did not tell me the sponsor’s identity until after I’d filed copy that didn’t mention that firm anyway–it looks like the problem was some mixup on the advertising end.

Anyway, about this lengthy post: Researching the finer points of cloud storage and management services had me leaning well over my skis, but the experience left me with some helpful new sources to consult the next time I’m writing about cloud security and privacy.

9/12/2019: Ordering iPhone 11? The one thing wireless carriers might not want you to know, USA Today

You sort of have read this story before, and you will probably keep reading this as long as most of the major carriers continue to lock phones sold on installment-payment plans.

My daughter gets credit as the assignment editor on this: Handing over an iPad for her limited allotment of screen time kept reminding me of how unhelpful iOS is in this scenario. I could have written this any time in the last few years, but the impending release of Apple’s iOS 13 and iPadOS–neither with a real kids’ mode–provided a news peg for this story.