The situation in 2020 is more grave than in 2017. People aren’t marching to show their rejection of one new president and the prospect of his authoritarian misrule, but their anger about an entire system that tolerates the killing of black people by police and neighbors for little more than living in their American skin. These protests are happening while a global pandemic makes large gatherings dangerous, especially for those not wearing a mask.

And too many police have greeted these protesters–and sometimes journalists–with beatings, tear gas, bullets sold as non-lethal, and even bike theft. These alleged law-enforcement professionals could have picked no surer way to show that people denouncing police abuse of power have a point.

But as I did three and a half years ago, I stayed home today to perform the modern-parenting task of watching our kid while my wife marched.

My entire experience of what’s going on around the newly-fortified area formerly known as the White House grounds, just a few miles from my home, has been weirdly distant. About the only difference in my daily routine has been hearing what might be a few more sirens, which could reflect a response to protests or the occasional and disgraceful outbreak of looting or could have been first-responder business as usual.

The one protest I’ve seen firsthand happened Tuesday around the Clarendon Metro; it was peaceful, and the Arlington County police officers watching it did not wear riot gear. At another protest in Arlington last weekend, my spouse (a county government employee with no role in law enforcement) noted that ACPD officers cleared a lane of traffic and handed out water bottles.

Some of the same officers, however, responded Monday to a mutual-aid-agreement request by the U.S. Park Police and helped forcibly clear peaceful protesters from Lafayette Square so President Trump could have his picture taken fondling a Bible outside St. John’s Church.

Arlington’s police leadership has since shown itself willing to hear constructive criticism, and once again I feel insulated from the problems around me.

All of which is to say, the past two weeks have provided the opportunity and the need for me to consider my own privilege in this society and how each of the few times I’ve been pulled over by a cop, it’s left me to fear little beyond getting points on my insurance.

On Monday, the United States of America celebrated its 240th birthday. Things have gone pretty much downhill for us since. 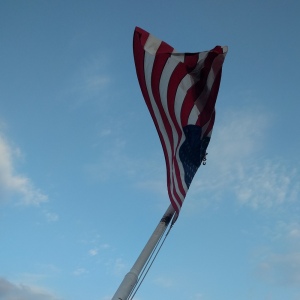 Tuesday, police officers in Baton Rouge shot and killed Alton Sterling outside a convenience store as bystanders Abdullah Muflahi and Arthur Reed recorded it on video.

I knew I couldn’t unsee those videos but watched them anyway. They can’t tell the whole story, but they all looked way too much like extrajudicial executions of fellow Americans who happened to be of African descent. I have grown to accept that African-Americans have sound reasons to be nervous about getting stopped by police, even as I have never worried about anything more than getting points on my car insurance.

That’s unsettling. So is the thought that the excessive use of force by a minority of police officers vastly predates the existence of technology to publicize it, the efforts of news organizations like the Washington Post to track it, and the rise of protests by people trying to make a point that shouldn’t be that debatable: Black lives matter.

Thursday night, another person decided the answer was to take an AR-15 rifle to the scene of a Black Lives Matter protest in downtown Dallas and murder as many cops as possible. This African-American–I refuse to use his name–killed officers Lorne Ahrens, Michael Krol, Michael Smith, Brent Thompson, and Patrick Zamarripa and injured seven others along with two civilians before the Dallas Police Department sent in a robot with a bomb (welcome to the future?) to kill him.

How could we as a country top the killings of two people almost live on camera? That was how.

None of those stories represent the nation I want to live in. Cops keep us safe–I sleep well knowing I’m not even a mile from Arlington’s police headquarters–but the rule of law is a good idea for them too. Don’t like how they do their jobs? Vote, every damn time, for leaders who will change that. Picking up a rock, a knife or a gun against people who volunteered to protect us makes you an enemy of civilization.

At least this rotten week brought two other things that do embody the United States I know. One was the sight of our daughter happily playing with day-camp classmates whose complexions cover most of the colors on the American quilt. The other came Friday, when the fifth anniversary of the final space shuttle launch reminded me that, as Anil Dash wrote, “We can do amazing things! I know because I’ve seen it with my own eyes.” Yes, we still can.