I’ve been recuperating from SXSW in the lamest way possible: by spending a lot of time weeding the lawn. Early returns suggest that my prior years of springtime toil have led to less chickweed, so I’ve got that going for me.

I spent a few days driving around D.C. and northern Virginia in an A8 that Audi loaned to test its Traffic Light Information system. The whole experience got a little more terrifying when I looked at the spec sheet for the loaner vehicle and realized that I was test-driving Audi’s stoplight-to-car data service in a sedan with a list price above six figures. 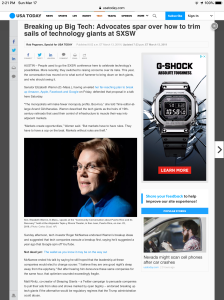 3/13/2019: Breaking up Big Tech: Advocates spar over how to trim sails of technology giants at SXSW, USA Today

I did not get to as many SXSW panels as I wanted, but I did watch the session featuring Sen. Elizabeth Warren (D.-Mass.). Warren advocated forced break-ups of tech giants, and over the next several days multiple SXSW speakers took it to task. The critiques you’ll see in USAT comments on this piece, however, amount to trash.

I didn’t even have the SXSW trade-show exhibits on my must-see list until meeting a friend for lunch, at which point he strongly suggested I check out Sushi Singularity. He was right.

The Arabic-language news channel had me on to talk about the Wednesday outage of Facebook, Instagram and Whatsapp. My takes: Securities and Exchange Commission regulations give us strong reasons to take Facebook at its word about the causes of this downtime; we should all work to depend less on Facebook and its vassal states for communication with bystanders, customers and fans.

If you were reading me eight years ago, this column should not have surprised you. My opinion hasn’t changed since because Apple still acts as if it has a God-given right to annex up to 30 percent of the content income of many App Store developers.