My published work this week includes one story about people in space and another about robots in the sky.

3/28/2022: Will SpaceX, Blue Origin, or Virgin Galactic ever be affordable?, Fast Company

Covering the Satellite 2022 trade show in D.C. two weeks ago both allowed me to interview somebody who’s experienced suborbital space flight and write this post about the prospects of more people being able to have that experience–if they can write a sufficiently large check.

I wrote up a survey that found that 15 percent of Netflix viewers watch for free on somebody else’s subscription.

The embargoed copy of this announcement specified a flight test around Dallas, but the final copy of the release left out that geographic detail.

This explainer went farther into the policy weeds than I’ve gone in a while.

The first of two posts about Apple’s App Store control covered a pending class-action lawsuit in the Netherlands–where Apple is asking for trouble with insultingly greedy responses to regulators’ demands that it let dating apps opt out of Apple’s in-app billing and its cut of 15 or 30 percent.

The second post covered an overdue and still inadequate App Store liberalization move by Apple. Yes, I enjoyed the chance to throw in a comparison to 1995-vintage AOL.

This column originally ran with a headline that named Comcast; although large and seemingly unfeeling telecom conglomerates can start to look alike, that cable company did not figure in my story.

Writing this got me up to speed with an episode of questionable executive-branch conduct under the previous administration that I’d missed.

I worked a volunteer shift at a COVID-19 vaccination clinic Friday, the fourth time I’ve done so. On this occasion, we had far fewer customers than before, most coming for their second round of Pfizer or Moderna. But a few had yet to get any dose, which meant that they got to choose between those two vaccines or Johnson & Johnson’s; the latter needing a single jab made the difference for one man who said he was only getting vaccinated because his job required it. We also had a few under-18 kids who were limited to Pfizer–and one whom had been brought by her mom on her 12th birthday, so we had to take a minute to sing “Happy Birthday” to her.

I helped write the bios for this list of top telecom industry executives put together by my trade-pub client. Yes, my last name is spelled wrong at the end of the piece.

I spent most of this week filling in at my other big trade-pub client. I started by covering an allegation by a broadcast-antenna vendor named Mr. Antenna that a Las Vegas station had quit airing its ads because increased broadcast viewing would undercut its cable-TV income.

I wrote up a Leichtman Research Group study finding more Americans signing up for at least three streaming services.

If you didn’t know that “desi” is a term for people of South Asian descent before reading this post, you did after.

Writing this led me to dust off my VPN service for the first time in months to see what pricing this new Disney streaming service would show to a viewer in its target Latin American markets–the press releases I saw didn’t list any.

I only referenced one Seinfeld catch phrase in this piece, which I thought showed remarkable restraint. 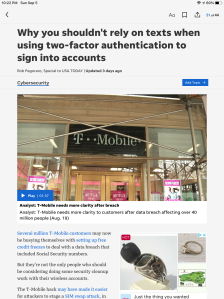 9/1/2021: Why you shouldn’t rely on texts when using two-factor authentication to sign into accounts, USA Today

I could have written this column at any time in the previous two years, but T-Mobile’s latest data breach made it newly relevant.

This post reminded me how much of HBO Max’s early struggles with getting its apps on streaming platforms.

As I tweeted after this story ran, the broadcasters who succeeded in suing Locast offline might not want to gloat too much. Viewers aren’t getting any less weary of endless pay-TV rate hikes, and telling people without good over-the-air reception to stick with cable will only get less persuasive every year.

9/2/2021: Apple to let video apps point users away from its payment system, FierceVideo

Apple deigning to allow “reader” apps to include one link to their own site shouldn’t be a big deal, but it is in the context of that company’s history of App Store control-freakery.

9/3/2021: Which wireless carrier has the best coverage where you’re going? Here’s how to find out, USA Today

A friend’s query about ways to see if T-Mobile or Verizon would offer better service than AT&T at his home was followed by my realizing that USAT had yet to cover the FCC’s release of a new and surprisingly helpful map of predicted LTE coverage from the major carriers.

The Arabic-language channel had me on to discuss WhatsApp getting hit with a €225 million fine for violations of the EU’s General Data Protection Regulation. The European Data Protection Board’s ruling in this case calls those failures of transparency, but I see the underlying problem as WhatsApp insisting on access to your phone’s contacts list to place a call or send a message to anybody who hasn’t already contacted you in the app.

Happy Father’s Day to all who observe! Fatherhood is probably the worst-paying job I’ve had, but it’s also the best job I’ve had. 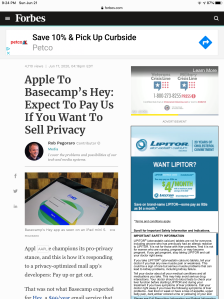 I jumped on the chance to write about Apple hard-balling the Hey e-mail app with a demand that Hey developer Basecamp add Apple’s in-app-payment mechanism–allowing the Cupertino, Calif., company to take 30% of all subscriptions opened that way. Then I discovered that writing for a site that lets me publish immediately does not curb my instinct to fuss over my prose before filing. Another realization with this post: Calling out Apple’s abusive behavior towards an app built along the privacy-optimizing principles it says rank among its core values did not yield page views by the truckload, notwithstanding the history of reader interest in that company.

I talked to my USA Today colleague Jefferson Graham about my recent column reminding readers that they should buy their cable modems instead of renting them.

The Arabic-language news network had me on to explain Twitter’s introduction of audio tweets. I said the upside of this was letting followers pick up on differences in intonation that text alone doesn’t convey, while Twitter will need to be careful about abusive types exploiting this feature. I told my producer that my favorite example of a good use of voice tweets was Liz Phair improvising a song about this product development; since I don’t know if that made its way to TV, I’m sharing that with you all below.