(Since a site redesign at the Consumer Electronics Association resulted in the posts I wrote for CEA’s Digital Dialogue blog vanishing, along with everything there older than last November, I’m reposting a few that I think still hold up. This one ran Dec. 16, 2011; it may help explain where the last few months of headlines about phone unlocking came from.)

One of the stranger rituals of U.S. tech policy is now unfolding in Washington: the triennial reassessment of the Digital Millennium Copyright Act’s “anti-circumvention” rules.

In this exercise, the Librarian of Congress considers granting exemptions to the DMCA’s ban on picking digital or electronic locks that control access to copyrighted works. The DMCA mandates this review because of the possibility–in retrospect, certainty–of companies abusing their immunity from customer interference with “digital rights management” systems to limit non-infringing uses. 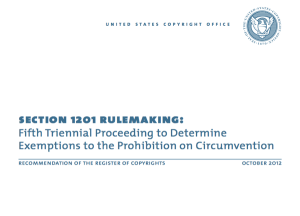 You may prefer to call this a “requesting permission to innovate” ritual.

He legalized hacking into Web-filtering software to inspect lists of blocked sites the first two times but didn’t renew that in 2006. The exemption granted in 2000 for defeating broken DRM mechanisms that wrongly deny access was then narrowed to a loophole for breaking obsolete or malfunctioning “dongle” hardware keys. (A related exemption, covering systems that require presenting an original copy of a program or game in a storage format that has become obsolete, arrived in 2003 but was not renewed in 2010.)

E-book customers won the right in 2003 to hack their DRM if it prevented the use of screen-reader accessibility software and have kept it since, but no equivalent accessibility exemption has been granted for movie viewers. And yet in 2010, the Librarian legalized ripping “protected” DVDs for fair-use criticism and commentary purposes, something still not allowed for DRMed e-books or music.

2006′s exemptions let you unlock a phone to use on a competing network, but 2010′s narrowed that to used phones. But last year’s proceeding also granted the right to jailbreak a phone to install the software of your choice–a big development for iPhone users.

Perhaps unsurprisingly, many of the 20 comments submitted in this year’s proceeding focus on preserving prior gains or ironing out inconsistencies.

For example, a group called the Library Copyright Alliance only wants to renew 2010′s DVD-ripping exemption, while the University of Michigan’s library seeks to have its protected class of students widened beyond those in “film and media studies.”

(Those links and all that follow point to PDF files.)

Public Knowledge wants to see the current DVD rule extended to cover “space shifting” to other formats, noting the increasing number of laptops without DVD drives.

A coalition of Telecommunications for the Deaf and Hard of Hearing, Gallaudet University and the Participatory Culture Foundation propose granting a broader exemption to make movie downloads, streams and discs accessible to those with hearing or sight impairments.

A group led by the International Documentary Association proposes to expand the same provision to cover Blu-ray discs and movie downloads and streams so that future filmmakers can incorporate fair-use excerpts in documentary or fictional works. A set of professors at the University of Pennsylvania and elsewhere make the same request for educational use and are echoed by the University of Rhode Island’s Media Education Lab.

The American Council of the Blind and the American Foundation for the Blind, meanwhile, want to maintain an exemption for making e-books accessible to readers with limited vision. The Open Book Alliance wants another for removing DRM from books that are already in the public domain.

The Electronic Frontier Foundation sent in an all-of-the-above brief backing exemptions for jailbreaking phones, tablets and video-game consoles and another set for unlocking DVDs, downloads and streams to extract fair-use clips.

Four submissions from individuals request blanket waivers on circumvention for personal use; a fifth seeks one for the narrow category of DRMed e-books in the Mobipocket format Amazon no longer supports on its Kindle readers.

We’ll have to wait until sometime in February to see which of these requests get a favorable hearing, or if any of 2010′s exemptions will disappear. That’s plenty of time to contemplate a broader question: If a far-reaching provision of a law carries such a high risk of collateral damage that an unelected official must drill holes into it every three years–and those holes seem to get bigger over time–shouldn’t we think about rebooting that rule?