DENVER–Two weeks ago, I tossed caution out the window of a hotel room and installed Google’s Android 7.0 on my phone one day into a business trip. The computing gods smiled on me, and the upgrade proceeded without incident and allowed me to experience the rest of the IFA show with the smartphone operating system Google also calls Android Nougat. 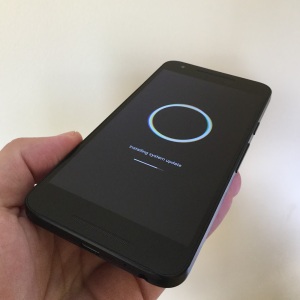 Google’s sales pitch for Nougat may lead off with this release’s inflated inventory of emoji, but the change I appreciated first is the Settings app. In Nougat, it doesn’t just show categories of system preferences–it shows the current status of most of them.

That’s a thoughtful change. Too bad that phones with third-party interface tweaks will probably bury it.

The Nougat feature I use most often, however, is its new multitasking shortcut: Tap the recent-apps button twice, and Android jumps back to the second-most-recent app.

Nougat also offers a split-screen multitasking mode (that leads off the Google’s list of Android 7 features for developers), but my phone’s 5.2-in. screen doesn’t offer the kind of real estate that would make this useful.

I’ve also made little use of my newfound ability to customize the Quick Settings panel after removing the screen-rotation control (which I only ever used by accident). I do, however, appreciate being able to reply directly to more messages from the notifications list. 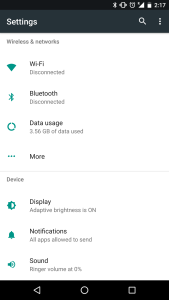 Monday brought a chance to try out the faster system-software updates Google has been touting. September’s security patches took 7 minutes and 15 seconds to install, which is less than instant but much faster than before–because I didn’t have that long wait as every installed app had to get reloaded.

At Google I/O, the company talked up Nougat’s more efficient use of memory. That got my attention, since the Nexus 5x’s 2 gigabytes of memory have often proved insufficient. I have yet to see my phone bog down the way it sometimes did before, although at least once I saw it fail to display my screen wallpaper for a moment after a round of switching between apps.

The Nougat feature that got me to do something as crazy as install a major software update to a critical device in the middle of a business trip was improved battery life. I haven’t done any detailed testing, but the phone does seem to last longer on days when I’m not using it like a tech journalist–that is, when I’m not constantly tweeting, replying to e-mails, and taking photos and notes, I can see the phone predict another 10 hours of battery life after I’ve gone seven hours without a charge.

But here at the Online News Association’s conference, no such luck applies. The phone doesn’t spend enough time in my pocket to benefit from Nougat’s ability to slow the system to a gentle stroll anytime the phone’s screen is off. So as I type this, my phone and my laptop are tethered to an outlet.

I had a two-city, four-airport week: I spent Sunday afternoon through Tuesday evening in Boston for the cable industry’s INTX show, flew to SFO that night and spent Wednesday through Friday at Google I/O before flying home Saturday morning. I am seriously exhausted… so it’s not optimal timing that I’m writing this from Dulles. Why? I was invited to moderate a panel at the Connected Conference in Paris later this week (and on the side, meet a bunch of French startups the government wants to show off). I haven’t been to my family’s one-time expat home in 25 years, so this would have been difficult to turn down. But I did think about that.

5/16/2016: Beyond Television: Extending the Media Brand Across the Digital Forever, INTX

I moderated this discussion with BET’s Kay Madati, Fusion’s Jigar Mehta and Scripps Networks Interactive’s Vikki Neil about how cable networks are trying to connect with current and potential fans outside the big screen. I may be a cord cutter, but I do have one of Alton Brown’s cookbooks and I often turn to Fusion’s tech coverage, so I guess I’m an example of successful beyond-television marketing. 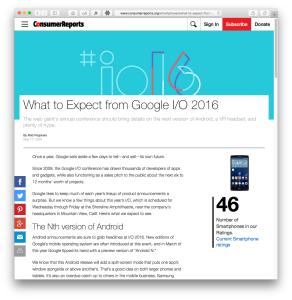 My debut piece for CR (no subscription required to read it) was a preview of Google I/O’s expected news that I think mostly holds up.

Right after I picked up my press badge, I ran into Jefferson and a few other USAT pals, and he elected to do a Facebook Live stream on the spot.

5/18/2016: Cable operators are trying to fix the single biggest problem with their apps, Yahoo Finance

I wrote a reality-check piece about the cable industry’s “but we have apps!” response to the Federal Communications Commission’s “unlock the box” proceeding. The cable operator that now seems most far along in providing TV apps that can take a cable box’s place without compromising on major features? Comcast.

This recap of the keynote that opened up I/O disappeared sometime between Wednesday night and Thursday afternoon due to a publishing glitch nobody noticed at the time. Sorry for the mess!

The news that Chrome OS laptops and desktops shipped in the last two years will get a free update opening them up to the Play Store’s catalogue of 1.5 million Android apps may have been the biggest consumer news out of I/O.

5/20/2016: Google: 3 steps you should take now to secure yourself online, Yahoo Finance

Like at last year’s I/O, Google’s security chief Stephan Somogyi gave a great presentation about the state of security that I judged worth a writeup.

My last I/O post broke down the changes coming to the next major Android release. I wound up finishing it on my Android phone–an excruciating experience–after my laptop ran out of battery on Caltrain on the way into San Francisco.