I don’t have to fly anywhere Monday, which seems a cause for joy after the last six weeks of travel.

This somewhat broad description yielded a talk on what we’re doing wrong in infosec with defy.vc managing director Trae Vassallo, Veracode co-founder Chris Wysopal, 4iQ CEO Monica Pal, and Emerson Collective managing director (and former Democratic National Committee CTO Raffi Krikorian. I will add a link to video of this (and the other panels I moderated in Toronto) whenever the organizers post it; in the meantime, enjoy the picture by my friend John Ulaszek.

5/21/2019: Comcast, DirecTV and others suffer another round of low customer satisfaction scores, FierceVideo

I wrote up the latest findings of the American Customer Satisfaction Index survey for my occasional trade-publication client FierceVideo.

I talked to AJ’s Arabic-language news channel about the growing isolation of the Chinese telecom firm via Skype from the Collision speaker-prep lounge; if you watched this hit live, that setting should explain the dull backdrop.

Panel number three of this week called for me to interview MongoDB CTO Eliot Horowitz, and that proved harder than I’d expected: The stage acoustics made it difficult for mo to hear complete sentences from him.

5/24/2019: At Collision conference, Facebook and the rest of tech gets taken to task once again, USA Today

I wrote a recap of the conference for USAT that noted the general distaste for Facebook’s reach and conduct as well as the lack of certainty over what, exactly, we should do about that company.

I’ve had few weeks that have left me more physically exhausted. Only hours after I was congratulating myself for crushing jet lag so soon after landing in Lisbon, the traumatic election destroyed my sleep cycle for the rest of the week, then I had jet lag in the reverse direction compounded by a cold I picked up sometime at Web Summit.

I filed the stories you see here about VR and cloud video weeks ago, so they didn’t add to the workload. On the other hand, the list below omits a post about Hillary Clinton’s broadband-expansion plans that my Yahoo editors had asked me to file by Tuesday afternoon so they could run it on Wednesday. I have never been sorrier to see a story of mine get spiked.

Management at Fierce must not have hated the post I did for them two months ago, so they sent a few more assignments my way. This e-book–as with September’s, you’ll have to cough up a name, e-mail and some occupational details to download it–features two stories from me about the state of virtual reality. 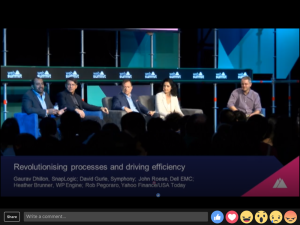 A panel about a topic as potentially vague as “using the cloud to make your business more efficient” could have been a tad dry. But my fellow panelists SnapLogic CEO Gaurav Dhillon, Symphony founder and CEO David Gurle, Dell EMC CTO John Roese, and WP Engine CEO Heather Brunner made it work. The link above points to a Facebook Live video of Tuesday morning’s panels on the Summit’s “SaaS Monster” stage; mine starts at about 55:10 in.

11/10/2016: A Complicated Forecast for Moving Video to the Cloud, Ads Move to the Cloud, Bringing Scale, Creativity and Inventory Issues, FierceBroadcasting

The first story for this Fierce e-book–you’ll have to cough up a name and e-mail to download it–covers some of issues streaming-video providers have to deal with when moving older video to cloud services. the second gets into the weeds with how ads make the same transition and explains oddities like ad breaks that don’t have an ad, just placeholder music or graphics.

This panel was a more obvious fit: I’m a full-time freelancer, and venture capitalist Bradley Tusk and Handy founder and CEO Oisin Hanrahan want to make it easier for companies that rely on independent workers to provide them with portable benefits they can take to a future “gig economy” client. My one regret: After Tusk suggested that Republican control of both the executive and legislative branches could mean progress on things like tax reform, I should have asked how repealing the Affordable Care Act would help the self-employed. Skip to 1:22:50 in the Facebook video to see this panel.

This was structured as an actual debate, with Deloitte CTO Bill Briggs assigned to argue that tech has done just that while Kochava CEO Charles Manning presented the opposing case. Being a full-time work-from-home type gave me a useful perspective; moderating the debate on four hours of nightmare sleep probably explains why I forgot to take a show of hands of the audience at the start and then had to take that measurement of the audience’s pulse halfway through. This panel starts at 1:41:30 into this Facebook video.

I felt like I was more on my game for this discussion with Qualtrics co-founders Ryan and Jared Smith than at the day’s two earlier panels, even though I was so tired at that point that halfway through, I was telling myself “15 more minutes of focus and then I can go pass out in the speakers’ lounge.”

I gave up trying to write this Wednesday–there was zero chance of it getting any attention in the glut of election stories–but then didn’t file it until Thursday evening. One reason why: Tuesday and Wednesday left me so destroyed that I somehow slept in until 11 a.m. Thursday, something I last did before the birth of our child.

This post about Renault Nissan and Cadillac’s ambitions to give you a limited sort of autonomous driving took a little longer to write as well. I filed it from my hotel before joining friends for dinner at around 9 local time, which is not a crazy time to have dinner in that part of the world.